Caitlin Huffman teaches job-training classes at North High School. Her students get out of the classroom and into the community where they practice the basic skills necessary in workplaces like Walgreen’s, Dirtburger, EMC, Petsakes and Kum & Go. The positions are like entry-level internships. Students are shadowed and graded, not paid.

But there’s also an entrepreneurial branch of this special education program that’s expanded this year. It started with Polar Bearistas, the in-house coffee shop that’s been serving customers on the North High campus every Thursday for a few years now. Business is good, good enough that it led to a spinoff.

Coffee soap is kind of a thing. It’s said to be good for the skin; a natural exfoliant. The Polar Bearistas got to thinking, what if we recycled our coffee grounds from waste into another product to sell?

It’s turned out to be a good idea.

North staff ordered 150 bars. Another $350 worth was sold at a craft show. Customers were more than satisfied. They started suggesting new product lines. How about something aimed at kids? Bingo! They got some new molds shaped like unicorns, substituted glitter and scents (lavender and Japanese lotus blossom) for the coffee grounds and orders poured in. Word got around. Local retailer Raygun even called and asked if they could take a wholesale lot to sell at their popular outlet in the East Village.

“I couldn’t believe it (when Raygun called her),” said Huffman. “They ordered ten bars and I said sure, but…”

With only six students currently enrolled in the job training class, a timeout had to be called on new orders so supply could catch up with demand.

Cleansing Claws is the soap brand name. Huffman’s associate teacher, Cyanne Studer, came up with it.

“She’s the best I’ve ever had the pleasure of working with,” said Huffman, who’s in her second year at North after coming there from Hiatt Middle School. Between them, the two are teaching beyond their curriculum, overseeing not only the coffee shop but now its soapsidiary, too.

Senior Mariah Cornelious is the soap production manager, ably assisted by sophomore Seven Harvey. They purchase bulk soap base at Hobby Lobby, melt it down in their classroom microwave, stir in the appropriate additives, mold it, let it form (kind of like Jello or cement) and then send it on to the packaging and delivery departments.

Mariah is quiet and businesslike. She calculates the invoices. Seven is lively, more of a whistle-while-you-work type. She likes stirring things up. They seem mismatched, but are not. Together, they make for a productive after school assembly line.

Every handmade bar of Cleansing Claws is packaged with a card that includes the product’s origin story.

“Your purchase will help provide opportunities for students to engage in meaningful tasks while acquiring skills for future success,” it reads in part. It’s a sales pitch more real than most Madison Avenue soft-soap.

Between the teaching and the retailing and the manufacturing, Huffman and Studer have a lot of balls in the air. But that doesn’t stop Huffman from thinking ahead and sketching an even bigger picture.

She owns four undeveloped acres near Norwalk where she envisions raising goats and using the goat’s milk to produce their own soap base. They could partner with other districts to provide opportunities for more students and scale up the operation(s) to meet the untapped demand they sense is there, but hold on!

One thing at a time, she realizes, rolling her eyes. Tomorrow’s Thursday, which means the Polar Bearistas will be open for business on a cold, hot coffee drinking/selling kind of a winter morning. First things first. 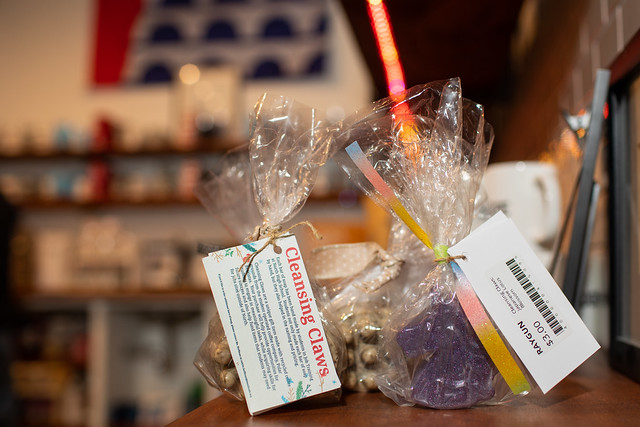