Observance of Black History Month took many forms throughout the district throughout the month of February, but a couple of Westside elementary schools capped it off in unique ways all their own.

Thursday there was a lot of daydreaming going on at Hubbell, site of the school’s annual I Have a Dream Walk around the square block that also includes Roosevelt High School. The title of the event evokes Martin Luther King’s iconic speech that is remembered as the rallying cry for the Civil Rights Movement in the 1960s. But there were lots of dreams at work in the ranks at Hubbell.

Beneath a rousing back-chant of “We have a dream!” while students assembled on the playground, individual marchers cited an assortment of hopes that included the ends of racism, bullying, pollution and animal abuse. Wake up people, and let’s make some dreams come true!

While the spirited dreamers made their way past Roosevelt, 5th grader Anders Lang sprang into action on the pollution front, picking up handfuls of litter tossed by teens and depositing it into the underused trash barrels on the high school campus.

At the front of the procession, a new chant broke out: “What do we want? Equality! When do we want it? Now!”

Hold those thoughts, Hubbell Hawks, and make them happen.

Meanwhile, on Friday at Windsor, music teacher Howard Harmsen had lined up a powerful one-two punch of visitors: State Representative Ako Abdul-Samad and local blues/jazz icon Tina Haase Findlay. Rep. Samad had to cancel at the last minute due to pressing legislative business at the statehouse, but no worries. If anyone can carry a gig by herself in this town, it’s Tina.

After the assembly in the school gym began with recitation of the Pledge of Allegiance, Harmsen introduced Haase-Findlay and it was on with the show.

She opened with a rousing a capella rendition of Lift Every Voice and Sing, aka the Black National Anthem. That got her audience’s attention, and she stopped singing long enough to share some of her personal black history.

When she asked if that was okay, there was loud and unanimous agreement that it was not and the stage was set for two more songs, A Change is Gonna Come and We Shall Overcome.

Haase-Findlay’s audiences are typically older than the one at Windsor and her performances nocturnal. But she had the gym there jumping in broad daylight and the show closed with Harmsen leading the students, and their guest, in a full-throated encore of the Windsor school song.

History is hard to grasp for schoolchildren. They have so little to go by. But the future, that’s different. They’ve got plenty of that. Plus, they love to lift their voices in song, they can’t wait for change to come and they do believe, deep in their hearts, that we shall overcome – someday… 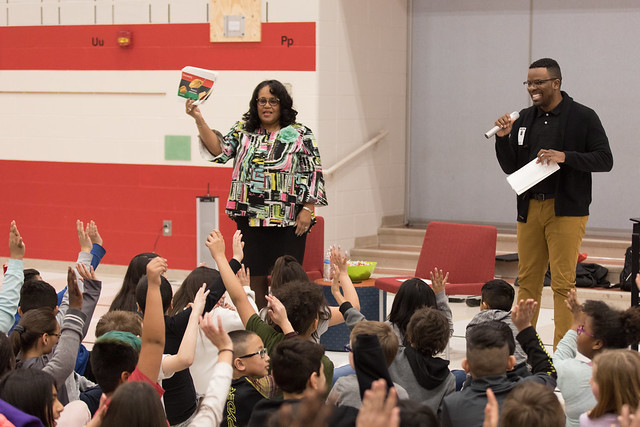