There were no classes on Monday at DMPS in deference to Martin Luther King Jr. Day, but Dr. King’s memory was honored around the district, as usual.

“Flippin Tha Scrypt” was the theme for the summit attended by some 130 students from Callanan, Goodrell, Hiatt and Weeks middle schools and Lincoln and North high schools.

Attendees were challenged to fly in the face of stereotypes and chart their own courses rather than accept destinies and limitations imposed upon them by others.

The keynote speaker was Words Taylor, a dynamic, motivational spoken-word poet with longstanding ties to DMPS where he’s been instrumental in coaching district teams for competition at the Brave New Voices Youth Poetry Festival and establishing the half-pints poetry program at district elementary schools. He remains the mentor for Movement 515 poets at East High.

Get rid of critics (the destructive, not the constructive, kind), complainers and takers, Taylor advised the students. Establish boundaries and enforce them through mutually beneficial relationships.

Taylor opened his address with a poem about finding one’s own true voice and echoes of it rippled through the day and across town to Central Campus for an MLK event that’s just as annual as the Y’s prayer breakfast.

Every year, RunDSM/Movement 515 celebrates the legacy of Dr. King with a community service activity organized in conjunction with the Urban Leadership program at Central. This year, the Culinary Arts program at CC got involved, too.

A free hot meal that featured a soul food buffet was served in the multipurpose room at Central Campus where donations were also collected of gently used winter clothing for relay to community agencies serving those in need.

Two students personify the overlap between the two school programs.

Kyia Bradley is a junior at Roosevelt and she’s enrolled in both Urban Leadership and Culinary Arts at Central. Selene’ Sanchez is a senior at East who’s a regular at M515 workshops and poetry slams as well as an aspiring chef.

“Poetry and cooking have plenty in common,” said Sanchez. “You mix ingredients together that don’t look like much separately and turn them into something good.”

Bradley feels like the two blend together as stress relievers.

“I love to cook,” she said. “Someday I want to have a restaurant with a community service aspect to it.”

MLK Day wasn’t entirely a day off at DMPS. From the prayer breakfast that began it to the soulful supper at its end, the legacy of Dr. King was nourished. 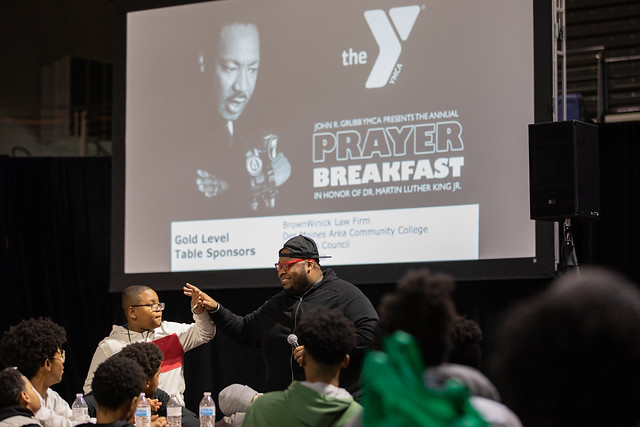