Last month, North High Instructional Coach Lori Bonstetter visited the State Historical Museum of Iowa. One of the exhibits there deals with the vaunted Iowa Caucuses that shift the US presidential campaign into high gear every four years. She was impressed and when she learned that a roadshow version would be touring the state, she arranged for it to make a stop at North.

“It really blew me away,” Bonstetter said. “I learned a lot about the Iowa Caucuses in my short visit.” So, she rightly figured, would the students at North.

“First in the Nation,” the Iowa Department of Cultural Affairs traveling exhibit, will be at North through December 12th, in between stops at Drake University and the University of Northern Iowa. North is the only high school on the statewide tour.

Wednesday morning, Sara Stieler’s AP Government class was in the school library where the exhibit’s on display, wrapping up a unit on the caucuses. What a coincidence.

“When Lori came up with this idea I told her the timing would be perfect,” Stieler said. “Next semester we focus on the office of the presidency more than the process that leads to it, so there’s a lot happening this year that’s helpful for teachers because students can see the relevance.”

The exhibit is a multimedia format that includes paraphernalia and videos from campaign cycles ranging from 1972, when Iowa emerged as “first in the nation,” through the present one. A Howard Dean windshield scraper from 2004, for instance. “Let’s See Clearly With DEAN,” it read, though the message would’ve been hard to make out while someone was preoccupied scraping ice off of their car windows that winter.

The exhibit isn’t the school’s first exposure to politics this Fall. In late October, before ending his presidential campaign last month, former Congressman Beto O’Rourke dropped by North, talking to a couple of classes and a student assembly.

“This is really like bringing a fieldtrip into our school where lots of students can see it over a 10-day period,” said Stieler, “instead of going to the expense and trouble of taking one class out of school on a fieldtrip.”

Stieler’s students are mostly seniors who will be old enough to vote next November and are thereby eligible to caucus in February, which suddenly seems fast approaching. Most of them indicated they intend to do so. But they took in the exhibit more as students examining what makes the electoral process tick than citizens trying to decide between candidates.

One of their assigned exercises was to compare and contrast campaign ads spanning half a century, from LBJ in the 1960s to Barack Obama, Iowa Senator Joni Ernst and New Mexico congressional candidate Valerie Plame Wilson.

Between the exhibit and Stieler’s lesson plans, the mix is a rich blend of American history with the art and science of politicking. Overall, a rather collegiate experience for students at Drake, UNI – and North High. 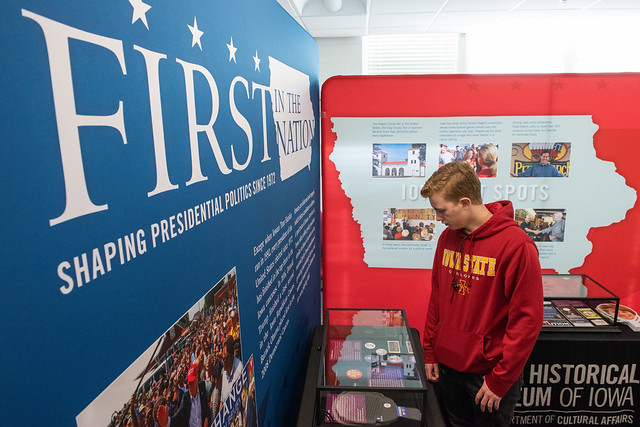