Not only did Julia Tubbs and Fez Zafar qualify for the Final Four in Iowa’s branch of the 58th annual United States Senate Youth Program, the two Roughriders were both selected to represent the state in Washington, D.C., from March 7-14, 2020.

“This is a huge honor for DMPS, as the Iowa Department of Education (DOE) only selects two students throughout Iowa and never before have they selected two from the same school,” said Roosevelt principal Kevin Biggs.

The USSYP is designed to provide students with a working knowledge of American political life, increase their understanding of relationships between the branches of government, and instill a lifelong commitment to public service.

In addition to the all-expense-paid intensive education/leadership program week, each delegate receives a $10,000 undergraduate college scholarship with encouragement to continue coursework in government, history and public affairs.

During their visit to Washington, delegates attend meetings and briefings with members of Congress, the president, a justice of the Supreme Court, leaders of cabinet agencies, a foreign ambassador to the United States and senior members of the national media that include opportunities for in-depth Q&A sessions.

Julia and Fez were called to the principal’s office Tuesday morning where they got their good news, documented and framed. They were joined by their parents who managed to keep the secret overnight after Biggs let them in on it yesterday.

What was the faux reason they were given for what turned out to be a brief surprise party in a conference room?

“He told me there was a problem with the choir,” Julia said about Biggs’s summons to help with one of her extracurricular activities.

“I just told Fez that I needed him to look at some documents,” said the proud principal.

Also present for the big reveal were the DOE judges who selected the two winners from the quartet of finalists who were grilled about their applications during a day at the Iowa State Capitol on November 13 that also included a civics exam and a tour of the statehouse.

Julia and Fez first teamed up at Roosevelt as members of the school’s jazz band; she a vocalist and trumpeter, he a pianist. Now they’re looking forward to an intense duet in democracy they’ve got a few months to prepare for.

The shared distinction they achieved is once-in-a-lifetime, but as for the trip to Washington that comes with it? It’s not the first visit for either of them and not likely to be their last. Don’t be surprised if they make it back, again and again.

After all, USSYP alumni include two current full-fledged US senators. A couple of future ones might be on their way next spring. 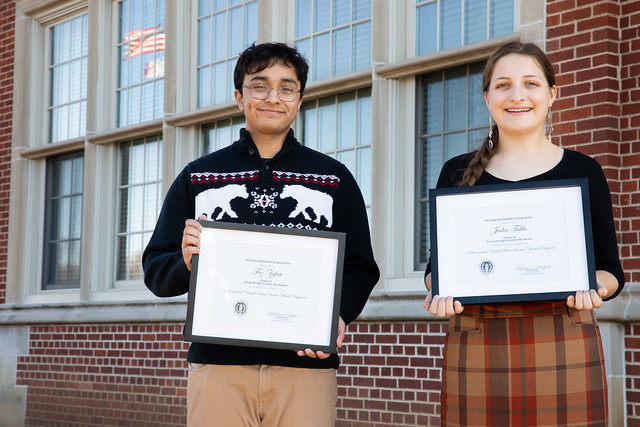