When Hoyt Middle School art teacher Lisa Hesse and her counterpart at Moore Elementary, Sydney Williams, were going to Sunday school together as kids, they never saw this coming.

Paths that separated a long time ago re-crossed as DMPS teachers, but even then, the two were colleagues, not collaborators. Their schools are ten miles and a few grade levels apart.

But posters hanging in Williams’ classroom gave Hesse an idea for a project to assign her students. And when Williams saw what was going on at Hoyt via Instagram, the ball was rolling toward a joint project that finally happened Thursday when a busload of 8th graders teamed up with a bunch of 5th graders on a pair of murals, one to hang on display at each school.

There’s much more, though, to what could have been just a nice story about childhood friends growing up to teach in the same district where they went to school.

The overarching topic for the artwork that students at the two schools have created is social justice. Subtopics span a wide range of issues, from racism to environmentalism. In other words, these are not your parents’, or even your own, elementary and middle school art classes. Nor are the finished products nothing more than completed class assignments.

“Numerous teachers and community members have seen the work online and they want copies for their spaces,” said Hesse. “One colleague wants to share the collection digitally at a national conference as a fundraising effort by our 8th graders for local charities.”

One thing has always led to another, but that dynamic has exploded exponentially in the internet age. The gallery of more than 100 posters produced by Hesse’s students and shared on social media spurred so much interest that the DMPS Business & Finance Department created the following link: https://dmps.revtrak.net/hms-studentvoice-for-socialjustice/

There, patrons of student art can purchase digital copies of hi-res photographs of more than 100 posters taken by DMPS photographer Jon Lemons. Before the end of the school year, two yet-to-be-determined local nonprofits will reap the proceeds from the poster sales.

On Thursday at Moore, the 8th graders were mentors; the 5th graders their protégés.

Williams, who graduated from East High in 2007, thinks social justice makes perfect sense as a tap into the creative juices of elementary students.

“These topics are things they experience in their lives,” she said. “Why wouldn’t they want to express their thoughts and feelings about them?”

One of Hesse’s students, Jayla Drew, just moved to Des Moines from Chicago. Her poster shapes the names of shooting victims into a powerful silhouette portrait that she speaks about as vividly as she draws.

“This conversation (about the Black Lives Matter movement) needs to happen,” she said. “Social justice is a topic that resonated with me right away when Ms. Hesse assigned it.”

Gabe Major’s poster addresses gang violence, but besides that, he wanted to talk about his teacher’s impact on him.

“At the start of the year she (Hesse) moved me away from my friends,” he said. “She said it would help me achieve my full potential as an artist. I didn’t like it at first, but now I am taking my artwork seriously as a way to show people that even though we are just middle school students, we have something to say.”

And something to sell, too, thanks to a couple of old Sunday school classmates whose separate ways turned out not to be so separate after all.

Photos from the Hoyt/Moore Mural Project 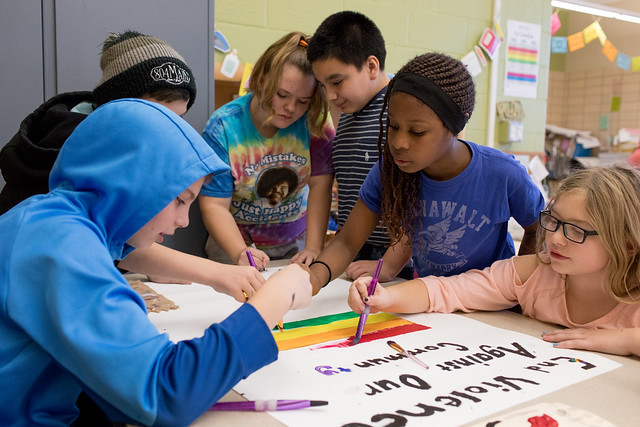