During the Civil War, Julia Ward Howe was inspired to write the poem that became The Battle Hymn of the Republic. A little more than half a century later, a small grade school opened in Des Moines, Iowa, named in her honor.

There surely aren’t many Howe schools around the country, especially so far removed from her birthplace, New York City. But the one that began here in 1919 lives on, and now, at the ripe old age of 100, it’s never looked better.

Howe’s current motto, Go Nice, is as distant from a battle hymn as Des Moines is from New York. But it’s good advice and certainly fit the prevailing mood when the Hawks celebrated their centennial after school on Thursday.

Since its humble beginnings a century ago, Howe was expanded in 1925, 1951, 1957 and again this year when a brand new gym opened. Yesterday’s open house was a come one, come all opportunity to see how the school’s grown.

And come they did.

Alums and other centennial celebrants packed the parking lot and the hallways. There were a deejay and dancing in the gym, cookies in the cafeteria and old yearbooks and other memorabilia in the library, named for one of the district’s  first “bus” drivers, John Alder, who delivered students to Howe in a horse-drawn wagon in the 1920s, tutoring them, too, along the way.

We met three of the Aller sisters in the library; Carolyn, Laura and Linda, who all attended Howe in the mid-20th century, as did four other siblings. They expected at least one brother to join them.

All three of the sisters remembered having a Miss Bagley (best guess as to the spelling) for kindergarten, and they weren’t the only ones.

Another who recalled Miss Bagley was Sally  Haydon Van Wert, a Howe alumna circa 1940s whose father, John Haydon, once served on the Des Moines School Board.

“He was in the first class at Howe,” Sally said while filling out a memory card next to the photo booth set up outside the new gym. Van Wert and her husband live in Hampton and drove in especially for the Howe hootenanny, a hundred miles to celebrate a hundred years.

Four-square is still a popular playground activity at elementary schools. This year the playground at Howe is sporting a painted grid with a hundred squares, numbered 1-100. Teachers built lessons around the occasion, from history to math.

Current students were posted throughout the hallways, passing out flyers and providing directions at the busy crossroads of past, present and future.

Thursday’s event at Howe retaught an elementary lesson. The pupils who pass through them age, but schools never do. 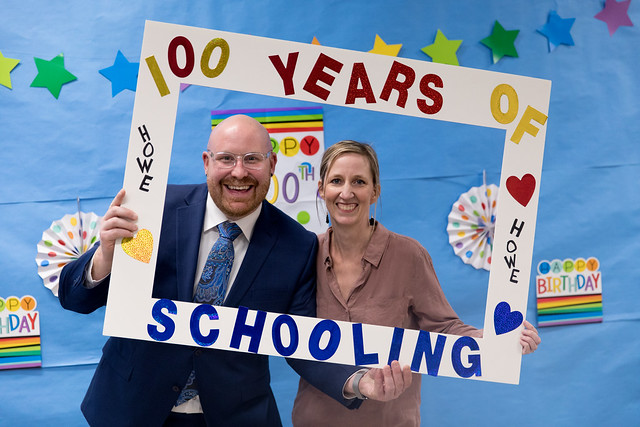