When Smouse School moved across a shared parking lot and merged with Ruby Van Meter last year, a longstanding tradition went right along with it, the annual Thanksgiving Feast to which the whole district is invited.

Tuesday it happened again and, as always, it drew a crowd.

“We cooked for 400 this year,” said Chef Chad Taylor from the district’s in-house caterer at the Central Nutrition Center. RVM only serves about 150 students, ranging from kindergarten to age 21, so the guests again outnumbered the hosts as DMPS administrators queued up to chow down and whet, not spoil, their appetites for the traditional holiday feed coming up on Thursday. Taylor’s menu featured homemade gravy and homemade pumpkin bars topped with cream cheese frosting, and he was there to personally oversee the banquet. “Nothing beats this, getting to come out and see everybody enjoying this event firsthand,” he said as the serving line began to grow.

Student volunteers from each of the DMPS high schools helped out in a variety of ways from classroom decorations to background music in the “VIP dining room,” aka, the school gym.

Unlike most other namesakes of DMPS schools, Ruby Van Meter wasn’t a president or a local tycoon or a superintendent or even a principal. She was first a teacher who later became the district’s Director of Special Education when a new program was designed for students with intellectual disabilities in 1959. She was retired but still living in Des Moines when the school was built and named in her honor in 1973.

It was the school board’s way of saluting RVM’s commitment and a promise to carry on.

So far, sooo good – especially the gravy and the pumpkin bars!

Photos from the RVM Thanksgiving Feast 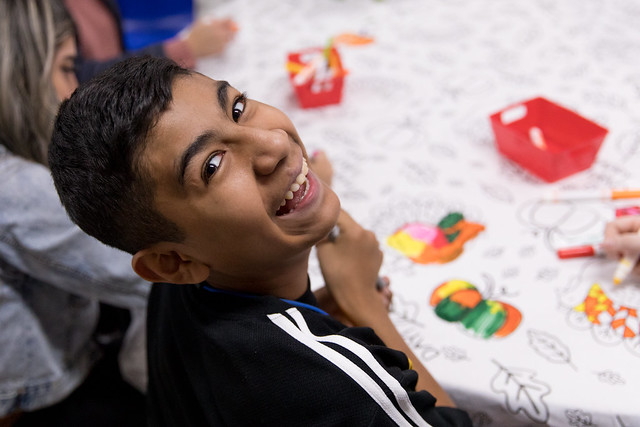