The classroom of McCombs Middle School social studies teacher Bev McPherson is always a political beehive around election time, and this year is no exception with Election Day looming next week on November 5.

Students across Iowa participated in the Iowa Youth Straw Poll on Tuesday through the Iowa Secretary of State’s office. Schools that chose to participate voiced their opinions on the presidential and congressional races that are in their preliminary stages and won’t be decided until a year from now.

Next week’s local elections concern municipal and school board offices, and important measures like the school district’s PPEL proposal, but the straw poll was still a timely exercise in how the gears of democracy work.

It can be a noisy, messy process, especially at the middle school level, so McPherson was glad to have student teacher Amelia Richards from Simpson College on hand at her polling place in Room 1315.

After watching some candidate campaign videos produced especially for the Election 101 curriculum and the Iowa Youth Straw Poll, student voters were presented with paper ballots that listed all of the candidates. But the key question to be answered had nothing to do with any of the races to be decided next year.

“Will you register to vote when you’re old enough?”

The hashtag for the event was #Beavoter, the only thing to appear on the ballot where any attempt was made to sway the outcome. And the results on that score are encouraging.

Out of 342 completed ballots at McCombs, 244, or 71%, checked “YES.” If that level of good civic intentions among 6-8 graders can be maintained at the level of eligible voter turnout in some future election(s), well, that would be a result for everyone to cheer.

Don’t forget: The next chance to shoot for it here is next Tuesday, November 5. For the first time, Election Day is a “holiday” at DMPS as students will be excused from classes.

For more on the Iowa Youth Straw Poll, visit the Iowa Secretary of State’s web site. 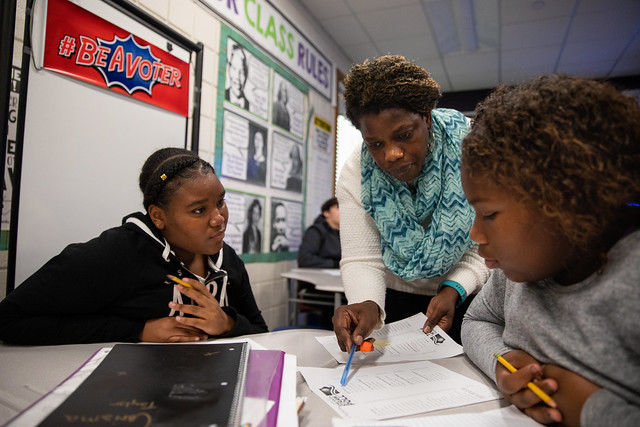