Sean Head’s number in the East High football program is 11. Friday night he wore #5, and so did hundreds of others in attendance at East’s game with, not against, visiting Waukee.

Last Saturday night #11 was a passenger in a car driven by his friend and teammate, Dominic Reidburn. There was an accident. #5 was killed. Last week was a long one on the Eastside.

In support of Dominic’s family, t-shirts featuring his number 5 were sold at the school. They were everywhere on Friday at Williams Stadium where the t-shirts were a ticket for admission. Even the Waukee cheerleaders wore them, and the Waukee players added #5 wristbands to their uniforms for the game.
East is the home of the Scarlets, but the t-shirts were black to match the mood of mourning that pervaded the campus throughout the week.

“Dominic was a hard working young man. He was just starting to come into his own,” said East Head Coach Greg Schoon on the eve of the game. “He was also a member of the Scarlet Ambassadors. This group is made up of upperclassmen that help mentor and guide underclassmen who may be struggling to find their way.  He was one of those students that teachers could trust to run errands or help others in class. It’s just a tragic loss and I think many are still in shock, so we’re still taking things pretty slowly with our team.”

Pregame observances included a moment of silence and announcements thanking the many area schools and businesses that rallied around East and the Reidburn family in the wake of the tragedy. The entire rosters of both teams gathered at midfield for the coin toss. Simultaneous with the opening kickoff,  the East student section released black balloons that rose heavenward.

The Scarlet offense, plus an unseen 12th player, took the field with Sean, normally a wide receiver like Dominic, at quarterback due to an injury sustained by the team’s regular QB in the previous game. He completed a long pass on the first play from scrimmage and later pinned Waukee at their six-yard line with a well-placed punt when the opening drive stalled.

The heavily favored visitors marched the length of the field to take a 6-0 lead, but Sean led East right back on an inspired drive that put the home team, the hurting one, in front 7-6 after the first quarter.

The rest of the game was beside the point, except halftime, when Dominic’s uncle, Ron Reidburn, spoke on behalf of the grieving family sitting in a reserved section of the stands.

“Thank you to everyone at East for all of the support this week,” he said over the PA from the press box. “And also, thanks to the Waukee community. So many of you have reached out to my sister and our family, it’s just been unbelievable; unreal.”

The final score will soon be forgotten, but those jersey numbers, 11 and 5 … Dominic Reidburn was 16. He’s the loss that people will always remember. 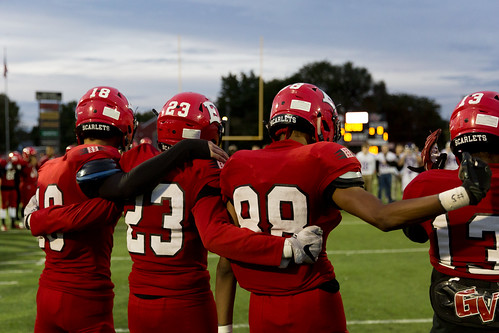