Angela Wittrock was born with congenital cataracts that render her legally blind, but she clearly sees what she wants to do and where she wants to go.

For instance, the North High sophomore runs on the school’s cross-country team. Next spring, she’ll be out for track, again.

The cross-country season is building to its climax. The CIML Conference meet is scheduled for next Thursday at Ewing Park but irony in the guise of injury threatens to sideline Angela.

The Iowa Girls High School Athletic Union requires that she be tethered to a sighted guide runner in order to compete. Unfortunately, Angela’s is out of action after falling on a flight of stairs recently. But…

“I have an idea,” Angela said to Coach Beattie while talking with us after school Thursday. The idea is that she’ll run untethered, sort of drafting behind a teammate who runs at a comparable pace. Angela sees well enough to manage that, she’s sure, but it would require the waiver of IGHSAU rules, so…

“We’ll have to see about that,” said Beattie, who was hearing Angela’s idea for the first time. That didn’t mean she was necessarily surprised by it.

“Angela doesn’t let anything stop her,” said Beattie, who besides coaching cross country and track at North is also the Community Schools Coordinator at Weeks Middle School. “She’s an amazing athlete and person who just wants to be treated as much as possible like everyone else.”

“I am learning how to advocate for myself,” is how Angela describes her growing determination.

Certain accommodations are necessary, however. In track, for instance, when Beattie wanted to include Angela on some relay units, they contrived a system with Beattie positioned on the infield near the exchange zones so she could alert Angela when to receive and pass the baton.

Track lanes are too narrow for guide runners, but Angela’s vision is sufficient for her to stay in hers and run essentially in a circle as opposed to over hill and dale on unfamiliar courses during cross-country season.

“I can see that there are posters over there,” she told us, sitting in the school cafeteria and pointing toward the wall, “but I have no idea what they’re about.”

Angela uses a cane to navigate her way through daily routines. She meets three times weekly with her DMPS Teacher for the Vision Impaired, Karen Kennedy, during Polar Bear Time, a half-hour block embedded in all students’ class schedules. Kennedy provides guidance with not only Angela’s classes at North, but also braille training she receives through the Iowa Braille School.

“My TVI has also helped me with speaking up for myself,” Angela said. “Like, if I need to tell a teacher that I have trouble seeing some material, I need to tell them so and I am getting better at doing that sort of thing.”

Angela is one of six siblings.

“They don’t treat me special,” she said. “Our mom has always told me that I have to get along and make my own way.”

And so she does, with an easy, long-legged loping stride and an unsinkable attitude. Though she falls smack in the middle of that sibling six-pack, Angela is otherwise a frontrunner, someone who sets a pace that’s tough for most to match. 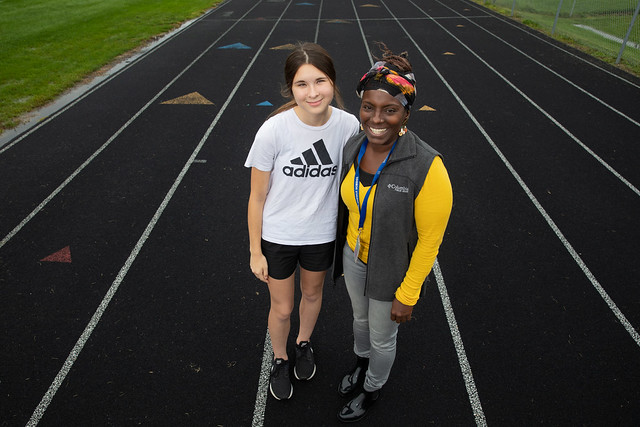