For the past few years, the motto at Howe Elementary School has been “Go Nice!” Fitting then, that the school is launching an extra effort to make sure its community doesn’t go hungry.

After school Tuesday, the Mobile Food Pantry operated by the Des Moines Area Religious Council made the first of what are going to become regular stops at Howe on the 2nd and 4th Tuesdays of every month.

“It has been a dream to have a food bank at Howe but we do not have room to support one and we did not know where to start,” said Howe Office Manager Gale Hohl. “Our new SUCCESS case manager, Natasha Coffin, trained last summer with the Food Bank of Iowa and mentioned that Howe does not have room for a food bank, but we had heard that River Woods (Elementary) had a mobile food truck coming to their school. She was referred to DMARC.”

The DMARC grocery store on wheels has been stopping at River Woods on the 1st and 3rd Thursdays of every month since last January. Since then, “We have distributed over 4,000 items to 85 households,” said Tiffany Taylor, Coffin’s counterpart at River Woods. “We are serving about 10 households and 25 people every month.”

The turnout on Day One at Howe suggested that customer traffic flow there will be comparable.

“After a brief intake process, clients are issued a point total to shop with,” he said. “Products are ‘priced’ to incentivize healthy choices.” The healthier the food, the lower the number of points it costs. In addition to foodstuffs, the truck is stocked with a supply of personal items, too.

In addition to becoming a regular stop on the DMARC route, Howe has been operating a program for six years called Backpack Buddies that sends food home with kids on Fridays.

“We collect donations through a local church and the Food Bank of Iowa,” said Howe teacher Tamica Comito. “It’s mostly snacks and simple foods to make sure that kids have something to eat on the weekends.”

More than 50 DMPS schools now provide free breakfast and lunch for their students. But the nourishment isn’t confined to the school day or limited to only students. The two mobile food pantry stations served by DMARC are the latest examples of district schools extending services to students and families beyond the classroom. Besides Howe and River Woods, on-site food pantries operate in conjunction with the Food Bank of Iowa at the following 16 schools:

Funded primarily by the Polk County Board of Supervisors and the Partnership for a Hunger-Free Polk County, the DMARC Mobile Food Pantry program is in its third year. Community sponsors include Stivers Ford Lincoln, Schneider Graphics, Snappy’s Trailer Store and H&H Trailers. 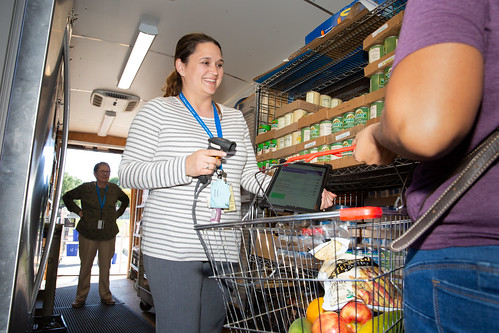