Something new and different has been going on deep inside Harding Middle School the past couple of weeks, and maybe that’s right where a yoga residency belongs, given the discipline’s deep-seated three (mind, body, spirit) dimensional approach to fitness.

PE teacher Rhonda Penquite’s wellness classes have been meeting in a basement area that formerly served as the school’s weight room. But since Ben Spellman, whose Good Vibes Yoga enterprise recently expanded to a branch studio in the Harding neighborhood, took over the space, weightlifting of an altogether different sort has been practiced.

Thursday morning Spellman led a class during its second session of the week. The paces, or poses, he put them through were a menagerie of cats, cows, cobras and butterflies. On the whiteboard at the front of the room were the daily learning targets and success criteria required by Harding’s status as one of the district’s Schools for Rigor: “I can speak yoga; I will keep a yoga journal,” etc. Also on the board were photos of Penquite’s dog, Rapha, posed in some of the same stretches Spellman and the students were practicing. Who knew doggies were such natural yogis?

“Press the walls away,” Spellman instructed as the group segued from one position to the next, arms fully extended. “When they feel like they’re closing in on you, push them away.”

The idea is not only physical exercise, but stress relief and depressurization.

“Give yourselves a great big hug,” was Spellman’s next command and everyone obeyed, smiling as they straitjacketed themselves with an embrace.

The vibes were good, if a bit giggly at times. After all, these were middle schoolers doing yoga for the second time. “I feel like I’m at a chiropractor,” one student chuckled at one point. But overall, the feel was a serene mix of an old-fashioned kindergarten naptime, complete with personal mats, and calisthenics.

Kendzora participated in as many sessions as she could manage throughout the week and she hopes the residency can become just the beginning of something sustainable not only for Harding students, but staff as well.

“While the residency ends this week, we are looking for extension in the classroom through Rhonda’s curriculum and in the community through connecting students and staff with Good Vibe Yoga’s community center,” she said. “I’m hoping this becomes a way for students and staff to engage in wellness together.”

If that notion seems like a bit of a stretch, remember – it’s yoga! 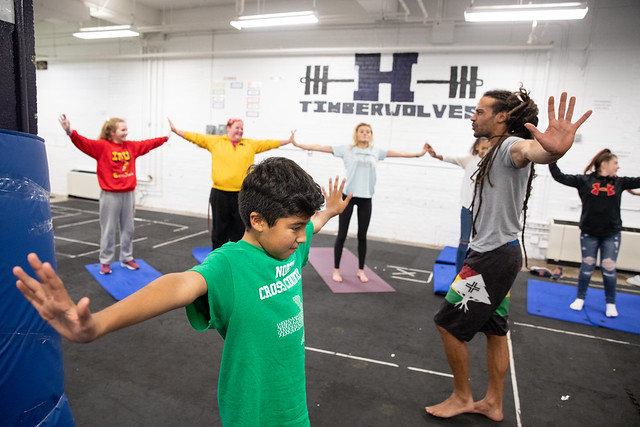