We’ve reported on the By Degrees Foundation many times before, most recently last spring, but it’s a story that just keeps getting bigger and better, so here we go again.

On Wednesday morning, Harding Middle School was the site where BDF announced the latest development in its sustained commitment to DMPS students at all levels in the Northside feeder pattern.

CEO Emily Westergaard, a North High grad herself, told a library full of students that they and all of their classmates, all nearly 800 of them, will soon have accounts established in their names with College Savings Iowa, the state’s tax-deferred 529 incentive plan to help families pay for postsecondary education and training.

“We are giving each of you $25 of seed money to open your accounts,” said Westergaard, “to get you started. Research shows that students who save as little as $500 are three times as likely to attend college and four times as likely to graduate.”

Collectively, that’s about $20,000 worth of money where the BDF mouth is, relentlessly stressing in communities where postsecondary education hasn’t been the norm how increasingly crucial it is in the 21st century.

Iowa State Treasurer Michael Fitzgerald is the chief administrator for CSI, and he was on hand for the announcement, along with DMPS Superintendent Dr. Tom Ahart. Fitzgerald was awarded an official Harding Wolf Pack t-shirt.

“Thank you for making me a part of your team,” he said, “and also, welcome to our team at College Savings Iowa.”

Ahart served as the principal at Harding for three years prior to joining the district’s central administrative team. He used the occasion to echo the message that By Degrees has been delivering on the Northside since the establishment of its precursor, the Dreamer Academy, at Findley Elementary in 2014.

“I want to emphasize that you all need to plan on continuing your education after you graduate from North High,” he said. “It used to be that a high school diploma was enough to land a good job that would last and support a family. Not anymore.”

The seeds to succeed are a symbolic beginning to be built upon. Many of the Northside kids served by BDF will be “first gens,” the first generation in their families to pursue postsecondary school/training. What they are learning now is not only the importance of good study habits, but also the difference a good savings habit can make by the time they have to start paying for higher education.

Westergaard and Fitzgerald both stressed that once the accounts are opened, no amount is too small for a deposit. It takes $25 to open an account but there’s no minimum requirement for deposits to existing accounts. And, “I’m a grandparent,” Fitzgerald said. “Sometimes, when I don’t know what to get my grandkids for gifts on their birthdays or holidays, I just put money in their college accounts. Even if the amounts are small, over time they add up.”

There are other incentives besides easy gift-giving. Contributions by Iowa taxpayers to CSI accounts are deductible from their state income taxes.

So, the checks are in the mail for every student at Harding, and they’re bringing home some good advice they got at school on how to make something of them.

Photos of the By Degrees Event at Harding Middle School 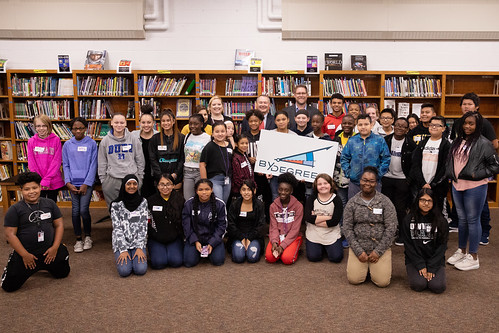