Associate Superintendent Matt Smith went far above and beyond the call of his duties Monday – emphasis on the word above – all for the cause of the “Inclusion Revolution” that we’ve reported on earlier this year, when DMPS and Special Olympics entered into an agreement to create Unified Champion Schools throughout the district, promoting social inclusion by bringing together young people with and without intellectual disabilities on sports teams.

To underscore how the relationship between the two organizations has reached new heights, and for the sake of one great story that he’ll be able to tell for the rest of his life, Smith rappelled down all 26 stories of the Financial Center downtown at 6th & Walnut as part of VIP Day for Over the Edge, a fundraiser for Special Olympics Iowa. Think of it as a vertical touchdown “run” of about 113 yards (340 feet)!

And just to make sure Smith didn’t send a stunt double in his place, DMPS photographer Jon Lemons went right alongside to document the experience.

As if any further perspective than looking down from the rooftop or up from street level was necessary to get a sense of the feat, a big bird glided by on Walnut Street as the intrepid DMPS duo made its way down – at a far LOWER altitude than Smith and Lemons.

Safely back on terra firma following his descent, Smith was asked if he had a good trip.

“Actually, it was even scarier than I thought it would be,” he said. “But, anything for the Inclusion Revolution. And, it was exhilarating.”

As for Lemons, an experienced rock climber, it was all in a day’s work, adrenalin included.

For more information about Special Olympics, Over the Edge, and how to donate or otherwise pitch in so Matt & Jon’s excellent adventure will amount to more than just that great story to tell and pictures to see, please visit the Over the Edge web site. 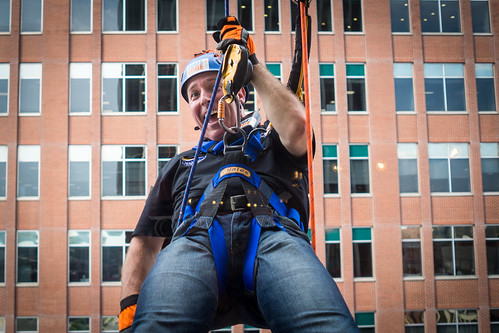