RSM is the largest accounting firm in Iowa and its origins trace to 1926. The company website doesn’t explain the monogram, but on Friday it stood for RailSplitter Movers.

Lincoln High School has been the home of the Railsplitters since 1923, but this year’s about merging Rails, not splitting them. The 9th graders-only Rails Academy on Porter Avenue is moving back into Lincoln’s main campus on Southwest 9th.

It’s a big project made more doable thanks to a lot of help from a true community friend.

According to Jaci Dammeier, an Audit Partner in the Des Moines office of RSM, most of the company’s local workforce was at Lincoln on Friday.

“About 175 of our 225 employees are helping out,” she said. “The school district is one of our clients, so when we were considering what to do for a service project we contacted DMPS and asked if there was anything we could help out with.”

“Yes!” was the resounding answer she got from Superintendent Tom Ahart. Since you asked…

Cara Edmondson is the Community in Schools Site Coordinator at Lincoln, and boy, was she busy coordinating on Friday!

“I’m not sure we could have pulled this off on schedule if it weren’t for RSM,” she said. “It’s not just today that they’re helping us. The shelves they’re installing in the Roundhouse required several prior visits for measuring and they were also built by RSM employees. And a lot of preparation went into the work they’re doing outdoors, too.”

Not bad for a bunch of bean counters, who took care of several items on the project punch list. Such as:

The volunteers were all sporting RSM t-shirts printed with the slogan A Decade of Doing. This year, RSM outdid itself.

Some of the volunteers roamed the campus with snack and beverage carts to keep the troops energized and their elbows greased.

“I told them before they started this morning that their help will enable our staff to focus more on our students,” he said. “That’s what this merger is all about, better outcomes for our students.”

The 9th grade RAILS Academy was established in 2008 to ease the transition from middle school into one of the state’s largest high schools. It made sense at the time, but there were tradeoffs, according to Williamson, and the anticipated academic benefits never materialized.

“A lot of Lincoln students told us that they felt like they were missing out on a year of high school,” he said, getting only 75% of the experience afforded at the district’s other high schools. “And we realized that they didn’t have any mentors that first year. We’d been discounting the value of mentorship from older students. Budget efficiencies with bus schedules and foodservice deliveries just accelerated a discussion that we were already having.”

Rails Academy, formerly Kurtz Junior High School, will be converted primarily into space for district offices as well as district-wide educational programs. Lincoln extracurricular programs will still use the gym and athletic fields located there.

Three weeks from Friday will mark the beginning of a new year for the vast majority of the district’s 33,000 students. They’ll hit the ground running on August 23rd, figuratively speaking, and every day counts.

Maybe the number crunchers at RSM can calculate just how much, after they catch their breaths and get back to their day jobs. 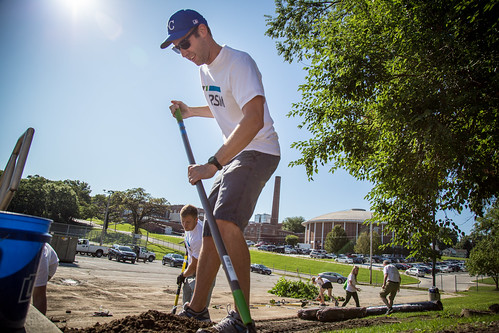