Seriously, that’s how many, so far, from the field vying for the 2020 Democratic presidential nomination have visited DMPS while in Iowa wooing voters in advance of Iowa’s first in the nation presidential caucuses next February.

Former Texas congressman Beto O’Rourke is the latest. Thursday morning, on the eve of the first day of school for the 2019-20 year, O’Rourke delivered a batch of school supplies to Moulton Elementary and toured the school, stopping along the way to meet teachers, thank them for their noble work and wish them success in the new year about to begin.

“Here’s our third-grader Henry,” O’Rourke said to Superintendent Tom Ahart, sharing a photo of his eight-year old son. “He was worried about going into a different class than his friends from second grade, but I talked to him last night and he’s already made some new ones, so he’s feeling better now.”

Moulton principal Eddie McCulley thanked his visitor for the supplies donation and took the opportunity to boast a little about his school and staff.

“There are about 35 native languages spoken by students here,” McCulley said. “I tell people Moulton is a salad bar, not a melting pot, because we like to celebrate each of the ingredients of our diversity, not melt them into one. I’m proud of our students and our staff. Together we are achieving tremendous growth.”

Ahart picked up on that point about growth.

“We have a Byzantine way of assessing schools,” he told O’Rourke. “In the eyes of the state and federal governments, all that matters is grade-level proficiency. Anything less is discounted as failure, regardless of how much progress is demonstrated by kids who may have come here from refugee camps without any literacy even in their first language. Eddie’s right. There’s great progress happening here and all across our district.”

O’Rourke said his visit to the Moulton neighborhood was revealing.

“We were out knocking on doors last night,” he said. “I was struck by the fierce pride that people here have in this community.”

Even though only a fraction of any school district’s student population is old enough to actually vote, where better than public schools for political campaigns to at least make a ceremonial appearance. After all, the ultimate point of public education is to equip students for responsible citizenship, right? Candidate visits are just one way Iowa’s presidential caucuses impact the school district. Others include mock caucuses in classrooms and dozens of schools serving as caucus sites on caucus nights in February every four years.

DMPS welcomes politicians and government officials whenever possible. Their visits are opportunities to showcase a district on its way to becoming the model for urban education, and also represent real-time civics lessons for students and staff.

Photos of Candidate Visits to DMPS During 2020 Iowa Caucuses 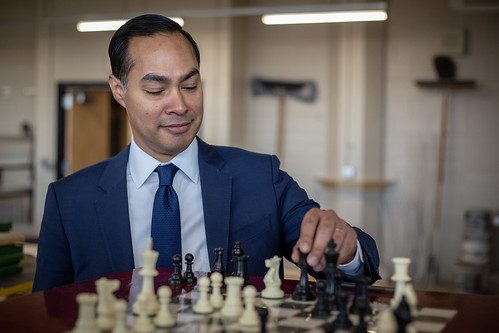