If the adjective virtual implies not quite or simulated to you, now hear this: Virtual Campus at DMPS is a very real deal!

Wednesday was Day One of the 2019-20 school year for some 200+ and counting Virtual Campus students who reported to their physical headquarters at the Kurtz Opportunity Center (formerly Lincoln RAILS Academy) to pick up computers, meet their instructors and generally get squared away.

According to VC director/principal Jon Mendoza, “We’re getting about five requests each day and adding students right up until enrollment closes for the first term on September 5th.”

Virtual Campus is a concept that piloted last year with about 75 students and is going through a growth spurt that promises to continue.

“We hope to reach 400 later this year and our five-year plan envisions up to 1,200 students,” said Mendoza. “We’re awaiting approval from the (Iowa) Department of Education as a standalone online school which will enable us to accept enrollments from other school districts, like Central Campus does. There is a demand for this type of service that we want to meet.”

Virtual Campus isn’t your parents’ model of high school, because that model, while it works for the majority of students, doesn’t work for all. It never did. Many bright, motivated kids who value a high school diploma have that possibility foreclosed by traditional high school class schedules.

Some would prefer being in school all day instead of working as breadwinners for their families. But they welcome an option that enables them to study and earn credits at their convenience.

Others suffer from chronic conditions that rule out daily attendance at a crowded urban high school campus.

“I have a lot of social anxiety,” is how Ellie Kuehler puts it. Midway through her sophomore year at East High, she began a mixed schedule that was equal parts traditional and virtual. This year, she’s all in at Virtual Campus, and so is her friend Joshua Sales. Both are articulate ambassadors for VC and personify why it’s a vital alternative to the brick and mortar school experience.

“I still identify as an East student,” said Ellie. “Eastside, Scarlet pride and all that still matter to me. It’s just that I do better in a different, calmer environment. My parents are super supportive of me going this route.”

Joshua was glad to hear what VC had to offer from Ellie.

“Last year I fell into a deep depression,” he said. “I’m so glad this is available to me and other kids with similar issues. Otherwise, we might not graduate. It’s because I know how important education is that I am here, not because I’m looking for an easy way out.”

Asked how they’d respond to a skeptic’s suggestion that Virtual Campus is just a façade to artificially boost graduation rates with diluted diplomas, Ellie and Josh roll their eyes.

“Honestly, the work we do is no easier than regular schoolwork was,” said Ellie. “It’s just a better setting for us.”

An almost collegiate one in some respects.

VC students are issued laptop computers, at no charge, and their teachers keep regular office hours at Kurtz on Wednesdays and otherwise by arrangement, much like college professors typically do.

Hannah Harmsen teaches English at VC after doing the same at Lincoln High School for eight years. She’s an example of the fact that teachers too can appreciate the flexibility it features.

“Work at home is a growing trend in lots of fields,” she said, “Why not education, too? I have two young kids at home now, so it’s great for me. Plus, I enjoy the chance to work more with kids on a one-to-one, blended learning basis instead of 20-30 at a time.”

Harmsen said teachers are “off-duty” from 6:30 PM-8:30 AM during the week but otherwise are expected to respond to student inquiries within two hours. She’ll have 90 students across five classes during the first term which is roughly equivalent to half a semester.

VC students, by the way, enjoy full DMPS student privileges, like eligibility for extracurricular activities at their home schools.

Ellie’s parents aren’t alone in their endorsement of the burgeoning Virtual Campus paradigm.

Sean Kohler is 14. He was identified as gifted early and skipped first grade. But he too developed social anxiety issues and by the time he was in middle school at Hoyt, they were manifesting in symptoms like an eating disorder.

“I started looking around for online, virtual alternatives,” said his mother, Theresa. “At that time, the district told me we couldn’t do that so I kept Sean in school for the core subjects and tried to homeschool him in other areas, but it wasn’t working.”

When they learned about the launch of the Virtual Academy last year, the Kohlers were excited. Sean’s older sister graduated from last spring from East, but that path was one he couldn’t follow.

“Yes, I would say that I’m thriving with Virtual Campus,” Sean said Wednesday morning, an assertion backed up by his smile and his mother’s nod. He wants to get into game development someday and besides core subjects, he’s studying graphics, photography (cameras are also provided) and visual arts.

There’s nothing virtual about what we encountered on the first day of school for the trailblazing bunch at VC. Customer satisfaction you could call it, pure and simple.

NOTE: Late Wednesday, Virtual Campus received state approval as a standalone online school, an anticipated development that will lead to even more growth.

Photos from Opening Day of the DMPS Virtual Campus 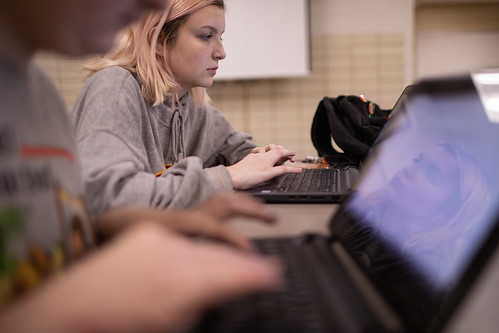