East High School’s baseball coach, Brian Luft, won his 600th career baseball game on July 11 when the East High School Scarlets won the game against Clarke High School. Below, see the tribute below read over the loudspeaker during the presentation of his award, and photos of Coach Luft receiving both his award and the winning game ball.

At this time would you please direct your attention to home plate for a special recognition. At home plate with Coach (Brian) Luft is his wife, Jenn, sons Jack and Tyler, daughter-in-law Kelly and (DMPS) Activities Director Lyle Fedders.

With that last Scarlet victory, Head Coach Brian Luft won his 600th career baseball game. Coach joins an exclusive list of coaches in the state of Iowa that have won 600 games. He is the 50th coach in the history of baseball in Iowa to have 600 victories.

Coach Luft has been a head coach for 27 years with stops at Ar-We-Va (Arcadia, Westside, and Vail, Iowa) and Roland-Story before becoming the head coach at East (High School in Des Moines.) Coach Luft has been the head coach at East for 21 years. During his tenure, the Scarlets have been to state two times and have won many conference championships. During his coaching career he has amassed a career record of 600 wins and 386 losses.

In recognition of his accomplishment, the activities department is presenting Coach Luft with a plaque signifying his 600th victory and the baseball team is presenting him with the game ball.

Please give Coach Luft a round of applause for his accomplishment. 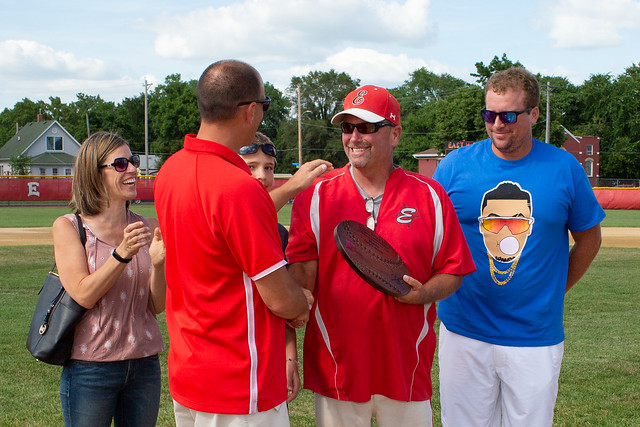