Bleak weather couldn’t rain on a special event Friday at King Elementary School. In fact, it may have enhanced at least one element of it.

Attendees were primarily students in the ISU College of Education, but also present were school board members from around the state and community stakeholders. Katy Swalwell, an associate professor of education at ISU and author of Amazing Iowa Women, kicked off the all-day workshop.

The event featured a pair of keynote speakers, one a professor from the University of Missouri; the other a doctoral candidate at ISU, but two DMPS students also played key roles.

Between opening remarks from King principal Kisha Barnes and the morning keynote address from Dr. LaGarrett King, Lincoln High senior-to-be Asascia Manderson set the tone for the day’s agenda with her spoken word poem, My Brown.

In the midst of it, thunder rumbled outside, as if on cue; thunder that the latter-day Dr. King who was waiting in the wings might have worried was being stolen from him were it not for his own considerable expertise and reputation in the field of black history education.

Manderson, who co-founded Lincoln’s chapter of CORE (Community of Racial Equality) and participates in the district’s Movement 515/RunDSM spoken word poetry program, later helped facilitate a panel discussion on the topic of Local Education Policy as Anti-Racist Activism among school board members from Ames, Linn-Mar and West Des Moines.

Ayanna Minnihan will be a senior next fall at Roosevelt High where she, too, is a CORE member and is also part of Rider Crew, a student leadership organization. She was a participant in the discussion following Dr. King’s presentation (Teaching Black History in K-12 Schools).

King Elementary made sense as the site for the event, given not only its namesake, but also the school’s affiliation with the ISU4U program that benefits Moulton Elementary, too, and helped make Friday’s workshop possible. King’s hosting of the event was also one more example of the district’s focus on educational equity in ways big and small.

In welcoming participants to her school, Barnes borrowed from the vision for it that was included in a history of the district written in 1976, just two years after King first opened its doors:

“It was supposed to ‘1) Provide a curriculum of relevancy. 2) Provide for development of self-worth and pride through the educational programs. 3) Serve the recreational and health needs of the total community, and 4) Draw students from other communities in an effort to create a multi-cultured educational setting,’” she recalled. “Those are still our objectives. And we continue our work toward them.”

Even during the summertime. And in increasingly close partnership with Iowa State.

Photos of the ISU Workshop at King Elementary School 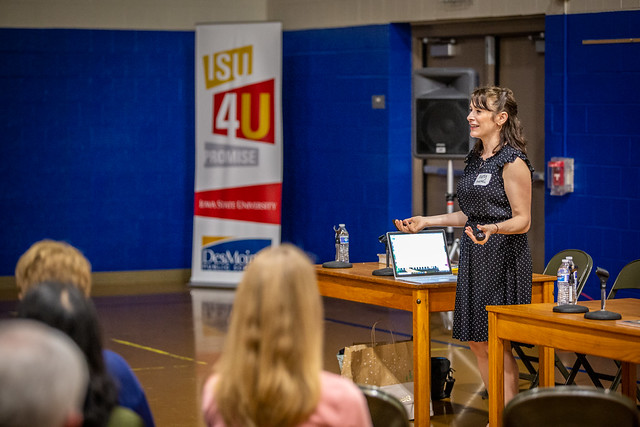