Is it school? Because it’s all about STEAM (science, technology, engineering, art and math).

Or is it summer camp? Because plenty of play and laughter are going on.

Each morning this week, 190 4-6 graders from around the district are convening at Central Academy and Central Campus to let their imaginations run wild together.

“This summer’s…experience features three options,” said Jill Alessio, one of the district’s GT (Gifted&Talented) consultants and the camp coordinator. “The traditional exploratory session (which includes all five disciplines), a math workshop designed specifically for the student-mathematician, and new this year, a robotics workshop focused on programming a ‘bot’ to perform various tasks.”

The hallowed halls of the district’s central academia twins were alive with everything from bouncy balls concocted from a formula of borax, cornstarch and glue to Spheros (robotic orbs) and Ozobots (coding toys). Oh, and bridges fashioned out of Popsicle sticks, strong enough to support a brick – or two! Or three! Or four!

The homemade balls were equal parts polymers and perseverance. At first, they don’t have much bounce in them, but if you keep at them, they keep rising and who knows how high they might eventually go? Hmm, there’s an ulterior principle at work in there somewhere.

A friendly Spheros competition the students coined “Battle Royale” spilled out of one classroom into the CA hallway. Watch your step – their projects were on a roll!

Meanwhile, a budding botist, shall we say, Hubbell 4th grader-to-be Oliver Shattuck, was in the next room, putting his Ozobot through its paces. It was only Tuesday morning and already Oliver’s Ozobot was capable of winding its way through the maze he designed for it, including both the “boring zone” and the “risky zone.”

It was hard to hear his explanation above the shouted chant of “Four bricks! Four bricks!” coming from the architecture lab where something like a martial arts demonstration was happening. Except, instead of breaking bricks with their karate chops, the demonstrators were hoping the bricks wouldn’t break their bridges, strung between two chairs.

Artsy types were rendering their images the old-fashioned way, with nib pens and inkwells, in sharp contrast to the futuristic goings-on in the robotics wing.

In the lobby, a circle of mathniks was constantly reshaping itself in accordance with the Fibonacci Sequence. You know, where the next number is found by adding up the two numbers before it.

No sunburn or mosquito bites allowed at this summer camp…just a bunch of new friends with strange names like Sphero and Ozobot.

Photos from the GT Camp at Central 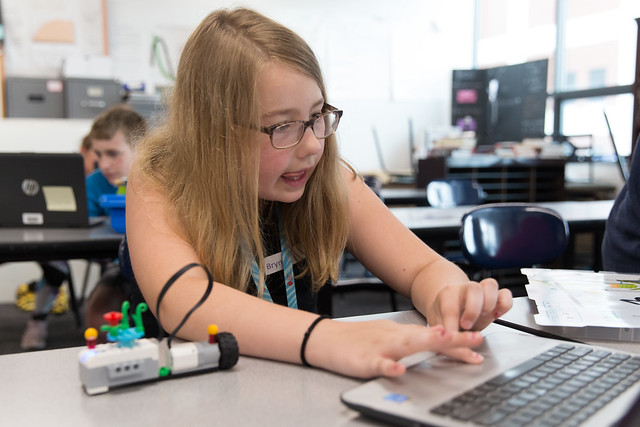