A Team Effort by DMPS Responds to an Act of Nature

Thursday night saw the first major thunderstorm of the season hit the Des Moines area. It took a team effort by the DMPS Operations Department to respond to one part of the city hit harder than most.

In northwest Des Moines, golf ball-size hail pelted the roofs of Hoover High School and Meredith Middle School. The two schools serve nearly 1,800 students and are physically connected, with their combined 300,000 square feet making one of the largest facilities at DMPS, and a big target for a big storm.

The evening custodial team at the campus soon noticed numerous leaks, and called in for additional support from the school district’s Facilities staff. A team of people were soon on-hand, some working throughout the night, to try and stop leaks along with moving or covering equipment and technology throughout the schools.

When the school day was about to begin on Friday, a handful of classrooms along with some common areas were unusable, and so some classes were going to be held in alternative locations around the schools. But as the morning went on, and more rain fell, it was time to call it a school day. Classes were dismissed at 11:30 AM so that the focus could be put entirely on clean up and repairs.

It was a team effort by the DMPS Operations Department in responding the changes brought about by this act of nature. The Food and Nutrition staff was on hand at both schools, setting up food service as students were dismissed so they could grab a lunch to go. They wore t-shirts that read “Keep Calm and School Lunch On,” as if providing students lunch under a roof damaged by hail was just another day on the job.

And when classes dismissed early a row of yellow buses sat waiting out front, as the Transportation staff rerouted drivers to make sure students had a ride home.

It will be a busy weekend for the Facilities staff as clean up and repairs continue. The district is working with a local contractor to install a membrane, or cover, on the roof, although it is expected the entire roof of Hoover and Meredith will be replaced in the near future.

Photos of Clean-Up Effort at Hoover and Meredith 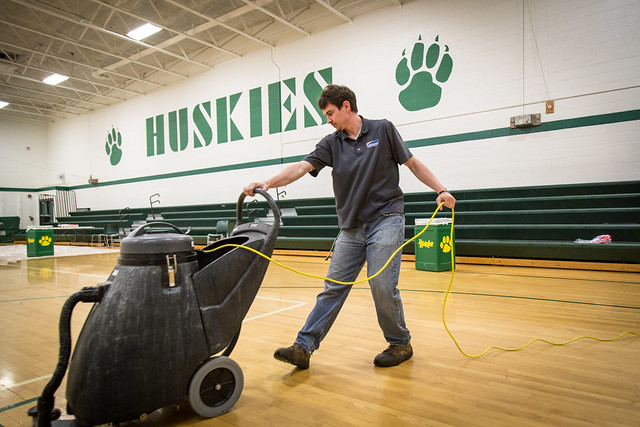