Perkins knows how to party.

The school that parades around its neighborhood in celebration at the start of each new school year is turning 100 years old this year, and that calls for some extra wingdings.

The public is invited to a double-decker event after school on Friday.

From 4:00-6:00, building tours will be offered, tracing the Perkins timeline in a context of remodels and additions over the years. Articles and artifacts will also be on display from highlights of the Perkins past.

Also happening from 5:00-8:00 is the school carnival, courtesy of the Perkins PTA.

Page 87 of a history of DMPS, prepared for the nation’s 1976 Bicentennial, is teeming with interesting factoids gleaned from the first half-century at Perkins, including the school’s namesake, David Perkins, who was the Superintendent of the West Des Moines Schools (as in the west side of the city, not the suburb) in the late 19th century.  But it fails to mention one of the school’s truest and proudest distinctions.

In 1946, Harriette Curley was hired to teach kindergarten at Perkins. The East High and Drake University graduate was the first African-American to teach in the district, a year before Jackie Robinson broke the color line in major league baseball.

At first, Robinson wasn’t exactly welcomed with open arms, and neither was Miss Curley’s hiring uncontested. Protestors petitioned the school board, claiming that area property values would decline. But as Superintendent N.D. McCombs noted in standing by Ms. Curley: “She topped the list of applicants by a wide margin. The board has had a policy, in writing, for years that all boys and girls get the best teachers for the money we can pay. And they are not hired on a basis of color, creed, or nationality.” (Read some of the newspaper articles at the time of her hiring in the gallery to the upper right.)

In the end, Perkins became a hub of the bustling Beaverdale neighborhood that’s a Des Moines favorite, and continues as such to this day.

We poked around the school library this week, trying to find clues to portions of the Perkins history that predate the current faculty and staff.

On one wall is a faded caricature drawn by Frank Miller, Pulitzer Prize-winning editorial cartoonist for the Des Moines Register from 1953-83, of the “typical Perkins student.” It’s a relic from a bygone era that doesn’t much resemble what a visitor to the school sees today.

One hundred is a significant concept at elementary schools. Teachers build lessons around it leading up to the 100th day of school every year. But 100 years? “Wow!” was essentially all some hungry kindergartners could say about that in the Perkins lunchroom when we were there on Wednesday. They reflected not only the ethnic diversity the school now boasts in its centennial year, but also the probability that kindergartners today aren’t much different from the ones in Frank Miller’s day or Harriette Curley’s groundbreaking classroom, wherever they come from; whatever they look like.

Friday night at Perkins is for Penguins from kindergarten to 100. Come and be wowed! 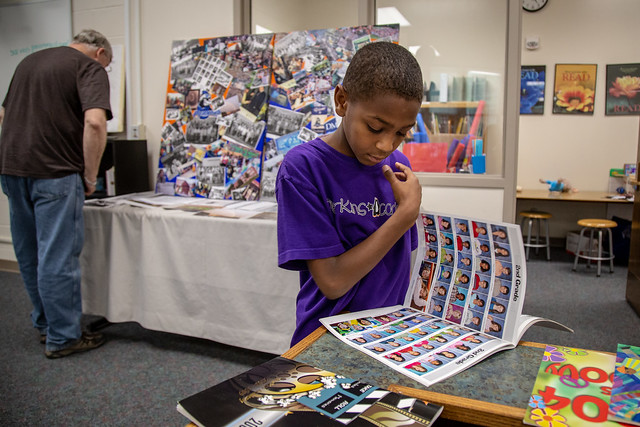