Hopefully the neighborhood around the State Fairgrounds never runs out of unpainted walls because one thing is certain: the students at Willard Elementary School won’t be running out of ideas for new public artwork for their neighbors.

For the fourth year in a row, Willard 5th graders designed and painted a large-scale mural. This year’s edition is near the corner of East 30th Street and Logan, on the side of the S&H Electric Company, right next to the mural painted two years ago.

The newest mural was very much a collaborative effort from start to finish. The 5th grade class worked in groups of four, each painting a design. The top six designs were then selected and mashed up into a larger-than-life, abstract jigsaw puzzle.

Students were to have painted the mural last Saturday morning but a rainstorm meant a change in plans. This morning the weather saw high-than-normal temperatures, but that didn’t slow down students from heading a couple of blocks down the street to get to work.

Under the watchful eyes of principal Julie Kruse and art teacher Lindsie Manzer – along with encouraging honks from passing motorists – the young artists were busily bringing their creation to life.

As with the other three Willard murals, this newest creation will be seen literally by millions, not only passersby throughout the year but also people from across Iowa and around the country who will head to the Iowa State Fair in August.

As in years past, Dave Diers of Logan Construction was a quarterback of sorts for the team effort. Two years ago he set the wheels in motion that led to Willard’s first mural, and remains committed to seeing opportunities for student-created public art become a reality.

In the case of Willard’s newest mural, a big thanks to the Davis Brown Law Firm, Great Western Bank, Jordison Construction, Keystone Trucking and Life Change Church for providing financial assistance to help students realize their goal of brightening up their neighborhood. 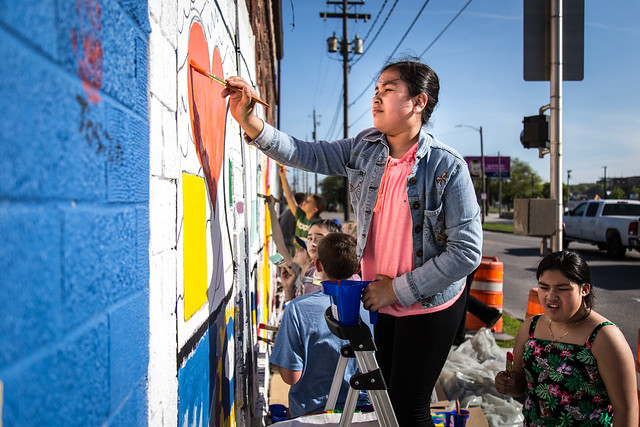