Project STAGE is Back for an Encore at DMPS

As we reported earlier in the year, Project STAGE (Students, Teachers & Artists: Generating Excellence) is back after last year’s acclaimed debut arts festival at Hoyt Sherman Place starring the DMPS Turnaround Arts schools from the Northside feeder pattern , and the stars started to align on Thursday morning at Findley Elementary School.

Avila’s genre is pop, but he got right into the groove of a catchy number called Parts of Plants (sung to the tune of Do You Know the Muffin Man) in one classroom.

“I can’t get that out of my head,” he said on the way to his next stop where he sat in on the daily circle as students, make that scholars, took turns sharing about their preferred art form. Avila was treated to a rap the class had composed with the aid of Flocabulary, a learning tool that uses music beats to engage kids in a wide range of subject areas. This one wasn’t necessarily in Avila’s honor so much as Mother Earth’s. The inspiration was Earth Day, but the creators were excited to share it with their guest, who they hoped would appreciate the format, and he did.

Winston Cox was the principal of a Turnaround Arts school in Washington D.C. before becoming the Director of Implementation for TA. He accompanies artists like Avila on visits to their adopted schools around the country, and is impressed with what’s happening at DMPS.

“It’s exciting for us to come and see and feel what Ben (DMPS Visual Arts Curriculum & TA Coordinator Heinen) and Kathleen (Davenport; the Arts Integration Coach at Findley and Madison) and everybody at the TA schools are doing together,” he said. “This is the real deal, getting kids excited about school and learning through the arts and spreading that throughout the curriculum.”

The festival formally opens after school on Thursday with an artist reception at Hoyt Sherman featuring the Findley Half-Pint Poets, the Northside Spanish Club, the Northside Capoeira Club, the Oak Park Creative Writing Club, the Harding Strings Quartet and a student photography exhibit.

Friday’s highlights will include six musical productions on the historic Hoyt Sherman stage, works that have been in progress all semester in preparation for this one big, leg-breaking day.

Get a load of this playbill:

Come and see for yourself. Admission is free! 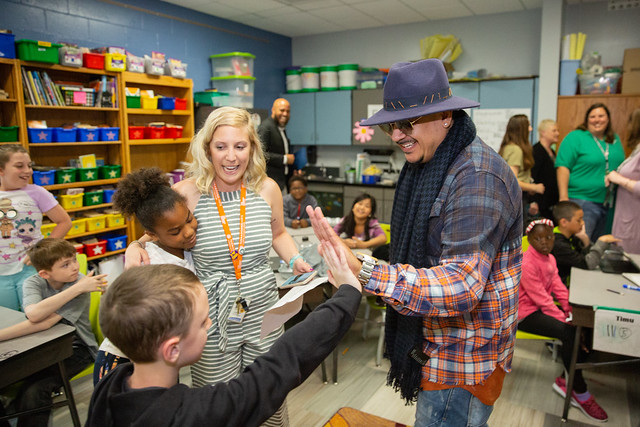