The community is invited to a reception  celebrating a half century since the U.S. Supreme Court’s Tinker decision, protecting the free speech rights of students.

The event is Sunday, February 24 beginning at 2:30 PM at Harding Middle School.

One great thing about citizenship, it’s a lifetime activity. Athletes, for instance, lose speed and strength over time. Not social activists like John and Mary Beth Tinker.

We caught up with them on Tuesday afternoon at the Brody Middle School stop, one of nine DMPS schools on the jam-packed Tinker Tour to mark the 50th anniversary of the landmark Supreme Court ruling in Tinker v Des Moines Independent Community Schools. They are talking the same talk and walking the same walk they did in 1965 when they were suspended from school for wearing black armbands in silent protest of the Vietnam War.

“I want our parents to know that I have considered myself an antiwar activist all of my life,” said John at one point in a roundtable discussion with a conscientious group of 8th grade student government leaders at Brody, a school that opened in 1967 when the Tinker case was still winding its way through the courts. Fittingly, he now lives in a repurposed schoolhouse in Missouri where not only does he not shed his constitutional rights at the front gate, to paraphrase the majority opinion that ingrained the Tinkers in American judicial history, he’s the king of the castle.

For many, maybe most, people, the teen ages are a stage we pass through on the bumpy road to adulthood. For an exceptionally mature few, like the Tinkers, they are an early stage of lifetime commitment to lofty ideals. The armband protest wasn’t undertaken on a whim in support of a cause they later abandoned. The Tinker family was practiced at civic activism before America became entangled in Vietnam.

“Our father was a pastor in Atlantic, Iowa when we were small,” Mary Beth told the Brody students. “He objected to the public swimming pool there being for whites only. We got run out of town for that.”

In Des Moines, the Tinkers became friends with the family of Edna Griffin, a local civil rights icon who staged a sit-in at the old Katz Drugstore lunch counter downtown in 1948, years before Rosa Parks refused to give up her seat on a bus in Montgomery, Alabama. Griffin’s son Stanley was a childhood pal of the Tinker kids who became a lifelong friend. He accompanied John and Mary Beth to Brody on Tuesday.

“On Saturdays when we were kids, we’d all go downtown to picket together,” Griffin, who graduated from Roosevelt High in 1969, recalled. “Our parents taught us to speak up and stand up for ourselves and what was right.”

“The Griffin family had to buy their house on 44th Street, right across from Perkins Elementary School, from friends because no realtor in town would have sold a house in that neighborhood to a black family at that time,” said Leonard Tinker, John and Mary Beth’s older brother.

But the Tinkers aren’t here to talk about themselves. They don’t consider themselves the student rights icons others do.

“It’s great that eventually a blow was struck for students’ rights to free speech,” said Mary Beth, “but, after all, our goal was to end the war and that went on for a long time.”

She wants to focus on the issues that are important to today’s students and she does a good job of drawing them out. It took a while, but the Brody kids started to open up about everything from mental health to the border wall/lightning rod that’s as much in the news right now as Vietnam was when the Tinkers were teens.

Brody School Improvement Leader Maureen Griffin sat in on the dialogue and when it was over, she saw an opening.

“I think we have something to build on here,” she said. “We can get some small groups going and really get people talking to each other about important issues. This was a good start.”

Yes, the Tinkers are still stirring the Great American Melting Pot. Because that’s how you get different ingredients to blend.

Photos of Tinker Tour Stops at Brody North and Roosevelt 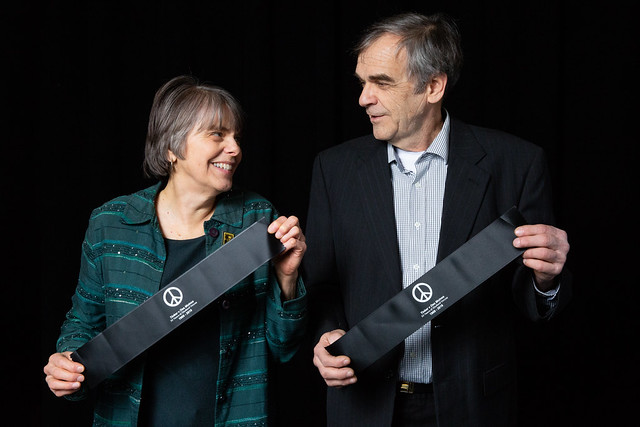