Parents, Students Take to the Hill on Behalf of DMPS

Wednesday was the annual DMPS Day on the Hill, an event coordinated by the DMPS Community Legislative Action Team (CLAT) in support of the district’s legislative priorities during the 2019 Iowa General Assembly.

Following an early morning briefing session at East High School, a contingent of school board members, students from the East High Ambassadors and concerned parents and citizens proceeded to the statehouse to buttonhole lawmakers about a variety of education issues.

Upon arrival there, the East students were led to the office of Senator Janet Petersen, the Iowa Senate Minority Leader. If they didn’t know how lofty her office is before they visited, they were getting an idea by the time they climbed all the steps it took to reach it. And they got an even better sense of its altitude in the state government pecking order when Senator Petersen told them she is the first woman ever to lead Iowa’s Democratic caucus. Senator Petersen lives in the Johnston school district but has a daughter who transferred into DMPS to attend Callanan Middle School. She has served in the legislature since 2001 and the Senate since 2013.

School board member Dionna Langford asked Senator Petersen about the makeup of the state legislature.

“There are more women this year,” she said, “but we don’t have much diversity here. I would encourage you students to use your voices and speak up about the issues that concern you. This is the people’s house and it’s not far from your school. It’s good to see you here today. I hope you’ll keep coming back.”

This year’s legislative priorities for the district are focused on increased support for ELL and preschool instruction, extension of the tax that funds capital improvements for schools and changes in the weighting formulae tied to dropout prevention.

Karin Leveke, a counselor at Monroe Elementary, was part of the district’s delegation. She spoke with State Representative Marti Anderson.

“She’s optimistic about passage of extension of the SAVE tax,” Leveke said. “That’s so important for the upkeep of our older buildings like the one where I work.”

Leveke also mentioned, to Senator Petersen’s point about the lack of diversity at the statehouse, that one of the challenges facing her and her fellow counselors and teachers is to raise the expectations bar for the students they serve.

“Part of our job is getting kids to see themselves belonging in places like this and jobs like these,” she said.

Besides any influence that’s brought to bear on current legislators about pending legislation, DMPS Day on the Hill is helpful in that longer range regard, too. High school students like the East Ambassadors become eligible to vote at 18 and eligible to run for the state legislature at 25. Climbing the steps at the statehouse is a good training exercise.

Click here for more information on DMPS CLAT, and how you can get involved. 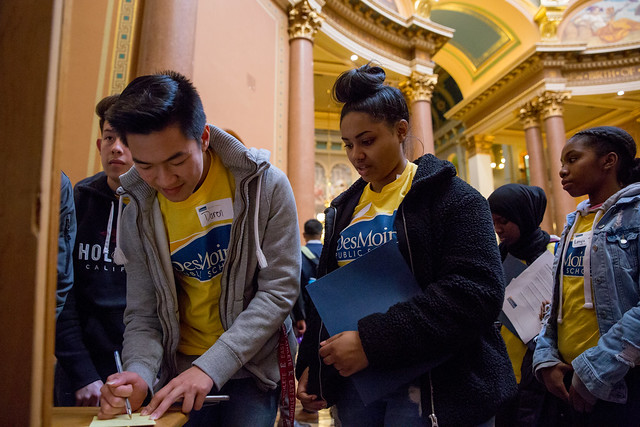