The DMPS administrative offices at 2100 Fleur Drive were the site for a fitting finale of Black History Month on Thursday, even if output fell off in the afternoon because employees ate too much.

Welcome Center staffers William Cannon and Dejah Banks coordinated a “Lunch & Learn” program that fed attendees in multiple ways. A sumptuous soul food lunch buffet was followed by a double dessert of peach cobbler and remarks by Dr. Lenola Allen-Sommerville, formerly assistant to the dean for minority programs in the College of Education and adjunct assistant professor in curriculum and instruction at Iowa State University (now retired).

Dr. Allen-Sommerville is a former sorority sister of Cannon’s mother, and she wrote the 1991 National Science Foundation grant that led to the start of Science Bound in all Des Moines middle schools. She was also the program’s first director. Science Bound is Iowa State University’s premier pre-college program to empower Iowa students of color for the pursuit of degrees and careers in STEM fields.

“Then in 1976, it became Black History Month,” she said. “What an accomplishment that will be when we reach the point of an awareness of African-American history year round.”

Cannon was the affable emcee who shared interesting tidbits about the menu while plates were loading up.

Maybe the Lunch & Learn event will catch on as an annual tradition at district offices. The first one featured plenty of both ELements. Next year people will come back for seconds of the cornbread – and maybe stand for the anthem/blessing, too, besides applauding whoever leads it. 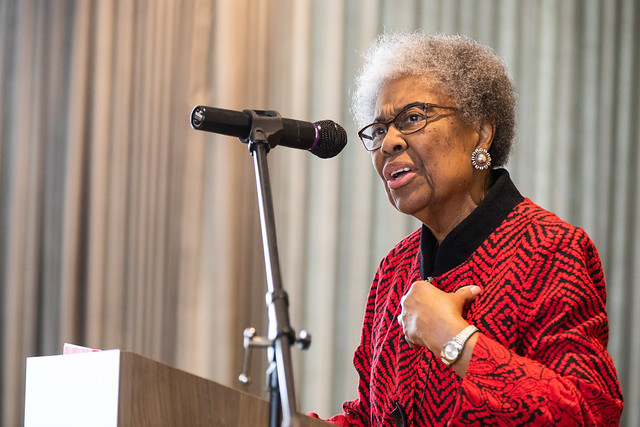