Fourth graders at Edmunds Elementary created some “Adventures on the High Seas” for themselves on Friday morning, and got to meet their almost brand new congressional representative while they were at it.

The school was the site of a Google CS First event aimed at piquing kids’ curiosities and imaginations with an introduction to coding.

“Googlers” captained the exercise that challenged students to create an animated story from the basic prompt of an empty boat afloat on the sea by programming elements like passengers, music and dialogue. They were introduced by Congresswoman Cindy Axne who was sworn in last month for her first term as the representative of Iowa’s 3rd congressional district, which includes 16 counties and the biggest school district in the state. She’s in Washington, D.C. every Monday through Thursday, and back home with constituents on the weekends.

“I know we’re in a library, but good morning!” Rep. Axne said enthusiastically and loud enough for everyone to catch the mood. She told the novice coders that she and her husband own a digital design firm that creates websites and the like for clients. “My husband is an artist type. Do any of you like art?” she asked.

Lots responded; same thing when she asked who likes math and who likes science, all of which are elements of computer science, a burgeoning career field teeming with high-paying job opportunities for STEM students when they finish school.

Not all of the Edmunds students are coding novices.

“I learned coding last year in 3rd grade,” said Jimmy James (“JJ”) Tenwah, who might as well have joined the Googlers as a presenter at the front of the room instead of answering pretty much all of the questions they threw out. JJ enjoyed the silly computerized story he and his partner programmed in less than an hour about an adrift monkey and an apple debating which would eat which, but he has bigger ideas about where STEM education in fields like computer science will lead him.

“When I grow up I want to figure out how to cure diseases,” he said.

“I want to be an astronomer,” he said. An astronaut too, perhaps, pursuing adventures in outer space instead of on the high seas?

“Maybe,” he said, rolling the possibility around in his head and smiling.

Or maybe someone in the room will join Rep. Axne in congress someday. Politics is another business where those skilled in both art and science are most likely to succeed.

Photos of the Google CS First event at Edmunds 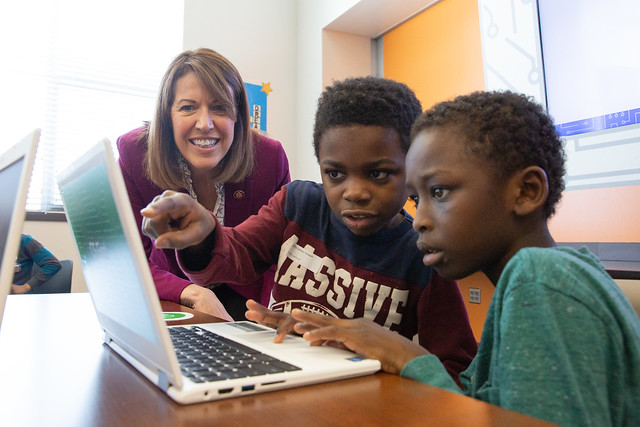