Last spring we reported on the district’s first annual Unified Sports Day, an event that is turning out to have been just the beginning of a beautiful relationship between Des Moines Public Schools and Special Olympics.

Since then, DMPS has been identified by Special Olympics as a school district at the forefront of the “Inclusion Revolution,” and a distinguished delegation of Special Olympics leaders is in town this week to officially cement a partnership that will lead to championship for local schools.

Unified Champion Schools promote social inclusion by bringing together young people with and without intellectual disabilities on sports teams.

Ray Roberts is the Director of Unified Champion Schools/Urban Development for Special Olympics of North America. Monday he spoke to an assembly of Hoover High students and Tuesday he was back there to facilitate roundtable discussions with students about what they think makes Hoover special and how to make it even more so.

During a nine-year career as an NFL offensive lineman, Roberts paved the way to end zones for ball carriers. Now he does something like that on behalf of Special Olympics Chairman Tim Shriver, who followed him into town for a ceremony that formally established the alliance between DMPS and Special Olympics and a downtown reception after an appearance at Tuesday night’s school board meeting.

Shriver is the son of Eunice Kennedy Shriver, who founded Special Olympics in the 1960s. What started as a summer camp in his backyard when Shriver was a little boy has grown into a global movement.

Shriver used to teach at the high school level, so he was right at home in a pep assembly in the Hoover gym Tuesday morning that primed the pump for the official signing of the Memorandum of Understanding between DMPS, Special Olympics Iowa and Special Olympics of North America.

“Let me tell you what I’ve learned about Hoover in just a couple of hours,” Shriver said after sitting in on the roundtables with Roberts. “It’s not cool at this school to make fun of people who are different or exclude them. Hoover students reach out, include and stay open. I know, because Hoover students told me so.”

Shriver’s flattery coupled with the Hoover tradition of friendly inter-class competition for the “Spirit Stick” that goes to the loudest grade level got the gym jumping before the parties signed on the dotted line, a formality worthy of cheers and celebration.

Becky Curry is the DMPS special education administrator who coordinated last spring’s Unified Sports Day that involved all 10 of the district’s middle schools. Now the elementary schools and high schools will be getting involved.

“The vision is that all Unified Champion high schools will field unified sports teams made up of a combination of students with and without intellectual disabilities in addition to their varsity and junior varsity and other teams,” Curry said. “The response to our event last spring was overwhelming. People wanted to join in and help spread the joy.”

Joy is the perfect segue to another big development that ties in with the now formal partnership between DMPS and Special Olympics.

Two Roosevelt students, Joy Rector and Evie Sly, have been selected to participate in the Global Youth Summit in Abu Dhabi in March that will be part of the 2019 Special Olympic World Games “based on their work as Unified Partners,” according to an email that disclosed the good news. i.e., because their friendship is what the movement is all about. We’ll share more about them separately tomorrow. They exemplify what began in Tim Shriver’s backyard more than half a century ago, brought him to Des Moines this week and will send a pair of pals who met over ice cream in 6th grade halfway around the world in a couple of months. 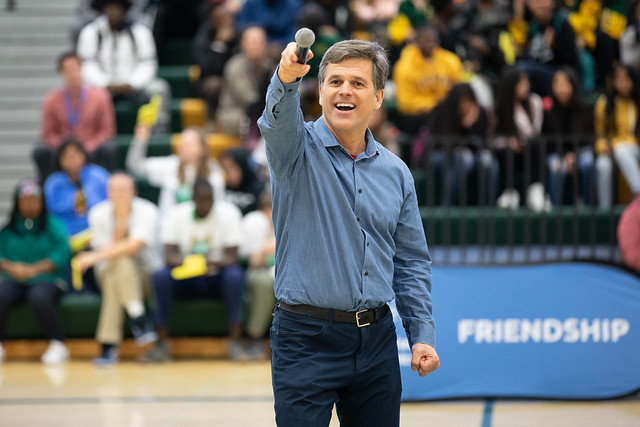