Like a franchisee going solo, the Des Moines chapter of the I Have a Dream Foundation is rebranding as the By Degrees Foundation. Or maybe the better analogy would be to suggest that it’s graduating.

The change was formally announced on Wednesday at Findley Elementary School.

Findley was chosen in 2014 as the site for the organization’s Dreamer Academy that established college savings accounts for every student. Correction, make that every scholar. Every child at Findley is labeled a scholar.

Ever since, evidence mounts that the tone set every morning by every grade chanting a jingle framed around its projected year of graduation from college is authentic. Optimism’s on the rise (NOTE: On the annual Gallup Survey taken by district students, Findley scored 47% on the Hope Index pre-Dreamer Academy. Last year that number had jumped to 81%.). Office referrals are in decline.

“Our new name is an acknowledgment of the reality that even when we were under the former auspices, we were building a customized model,” she said. “We flourished under I Have a Dream, and will continue to do so, but with more flexibility.”

The new name also hints at the fact that changing the trajectory of a child’s path by even a few degrees results in a further-reaching future.

Emily Westergaard is the CEO of the foundation, and she too cited the organization’s past performance as a predictor of bigger things ahead.

“We pioneered legislation here in Iowa that allowed nonprofits to seed college savings accounts for students,” she said at an assembly in the school’s event space under the natural spotlight of sunshine streaming in the windows. “And our partnerships with area colleges, trade unions and employers also make us stand out. Those features will only get stronger moving forward.”

Findley program manager Billy Kirby reassured students and families there that nothing will noticeably change right away from their perspectives.

“You’ll still be making campus visits,” he said. “You’ll still be earning deposits in your college accounts by doing well in class and coming to conferences. Those things won’t change.”

The campus visits that Kirby alluded to start early at Findley, by the way, and continue right on through the Northside feeder pattern at Harding Middle School and North High. By the time a Findley scholar graduates from North, he/she will have made at least eight of them, at no cost. The question by then probably won’t be whether or not college; it’s more likely to be which one.

Wednesday’s occasion became extra specialized by Tuesday’s disclosure that the By Degrees Foundation is one of four designated beneficiaries of proceeds arising from next month’s inauguration of Iowa Governor Kim Reynolds. Reynolds has been to Findley before, and her firsthand experience of the potential that percolates there obviously made a lasting impression on her.

Findley 5th graders capped off the event by singing the unofficial Northside anthem, I Can. They had to reach, but they hit the high notes. They’re aiming for even higher ones post-high school.

It’s all about trajectory, “the path followed by a projectile flying or an object moving under the action of given forces.” 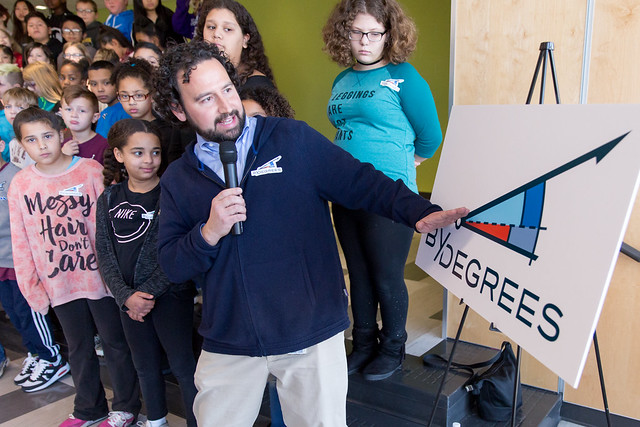