What a smorgasbord students had to sample.

Besides the built-in example of educators, there were journalists, firefighters, politicians, environmentalists, judges, dentists, soldiers, musicians, poets – even a magician was there, though the message common to all of the occupations represented was that careers don’t happen magically. They usually result from hard work and deliberate planning.

“Our goal is that every student will find a career or an area of study that interests them personally in order to begin setting goals and making plans for high school and beyond,” said Cari Long, Middle School Program Manager for the I Have a Dream Foundation, the coordinator of the event.

There are as many life paths as people, a point that was driven home during Block Two by the stark contrast between a pair of presenters.

In Room 129, Randy Wehofer spoke to an 8th grade literacy class about how he parlayed his lifelong love of baseball into a career that keeps him in the game without being on the field.

Wehofer is the Assistant General Manager of the Iowa Cubs. For many seasons, he was the team’s radio broadcaster before getting off the air (and the road) and into the front office so he could be at home more with his family. He and his wife have two kids about the same age as the Harding students, one of whom asked if Wehofer had been a good ballplayer when he was in school.

“I was good enough to make my high school team,” he said, “but not good enough to attract professional scouts. So I found other ways to make a living from a game I love. If you can do that, whatever you do doesn’t really seem like work at all.”

Meanwhile, in the auditorium, rapper Will Keeps was sharing an altogether different narrative.

Keeps grew up on the Southside of Chicago where the streets can be battlefields. He was a combatant when he was young, but he survived and escaped. Here in Des Moines, he’s become a prominent community activist, producing music videos designed to steer youth away from the streets and into the schools.

He was an exception to the general rule among the 60+ guests who volunteered to share their personal experience of how things work, or don’t, in the world at large. Most of them implicitly suggested that students might want to consider doing as they’d done. One of them explicitly advised against that.

All of them were good examples. 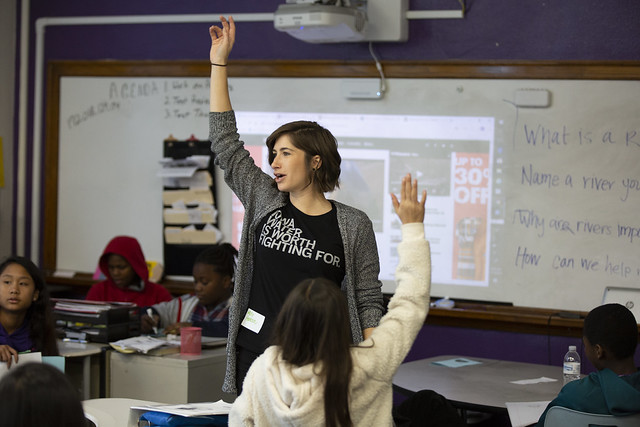