“Your handwriting is great – way better than mine,” said the former to the latter. “That’s so cool that your family followed the dream to come to America,” Elizabeth James also told Myint Cho, who smiled in appreciation for the compliments.

That’s how one pair of partners broke the nervous ice between them at the second annual cultural exchange between Meredith Middle School and St. Francis School in West Des Moines at the Meredith/Hoover High media center on Thursday morning.

Eighty-five St. Francis students rode across town to meet 45 ELL students who’ve come to Meredith from all over the world. The guests were welcomed with everything from handshakes to cakes. The hosts sang, too. Music, like handshakes and smiles, is a universal language.

Erin Maxon is in her 4th year as an ELL teacher at Meredith. Prior to coming there, she taught at St. Francis. The cultural exchange is a joint idea of hers and Jenny Umstead, her counterpart and former colleague at St. Francis.

“In December we will make a return visit to St. Francis,” Maxon said. “Last year we played soccer when we were there.” Another universal language.

So the visits are home and home, like interscholastic sporting rivalries often are. But these are just to meet and greet; not compete.

The students interviewed each other and exchanged previously written letters. In practically no time, all of the ice in the room had melted in the warmth of goodwill.

Elizabeth told Myint about her dog and her dancing. Myint told Elizabeth how villagers in the Burmese refugee camp in Thailand helped one another build homes roofed with banana leaves.

Song lyrics like “We’re saving our own lives” and “You’ve got a friend in me” quickly took on real relevance, and kids who’d come from different worlds to the same one for a few hours moved on to sillier questions from a provided list of Would You Rathers like:

Laughter broke out, another way of communicating that everyone understands.

This mutual outreach between a public school and a private one built a solid bridge in half a school day. Imagine it on a global scale. 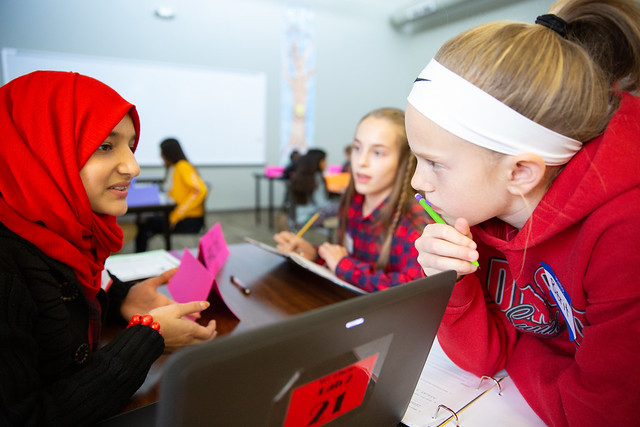