Beautiful Day for Young and Old in Greenwood Neighborhood

Wednesday afternoon was a beautiful day to walk over to a friend’s house for some after school play, and that’s just what the kids enrolled in Metro Kids Care at Greenwood Elementary School did.

Led by Kelly Moeller, the After School Enrichment Leader for the Greenwood chapter of Metro Kids, they carefully crossed 37th Street, after which they were only a quick alley cut-through away from Wesley Acres, the neighborhood retirement center where their “buddies” were expecting them.

This has been going on for four years now, and it’s such a win-win arrangement that it’s expanded.

“It used to be once a month on an early-out Wednesday,” explained Moeller, who’s been involved from the start. “But it’s so popular with both sides that we doubled it this year to twice monthly.”

Danielle Bloxham is the Lifestyle Coordinator at Wesley Acres and like Moeller, she was in on the ground floor.

“Kelly was looking for a community service extension at Greenwood,” said Bloxham, “and she came up with this idea. It’s been great for our residents, partly because there used to be a daycare facility on the Wesley campus that gave them regular exposure to children, but that’s gone now. They really look forward to these visits.”

Sometimes the group plays bingo. This time, with the holiday season looming, the main activity was coloring Thanksgiving placemats together. Always there are homemade cookies to share, fresh from the Wesley kitchen.

There’s some of the old school mixer dynamic in the air when the guests first arrive; a lot of curiosity and a bit of apprehension. But in no time the electric sharpener was whirring, keeping the colored pencils finely pointed, and the atmosphere changed from bashful to banter.

“Some kids have never been around elderly folks before,” Bloxham said. “They develop true friendships here. Many of our residents are former educators, or they might even have attended Greenwood when they were young.”

Another aspect of the alliance is nature taking its course. The students graduate to middle school and disappear. The Wesley residents eventually graduate, too.

Pointing to a 5th grader at the far table, Bloxham recalled a poignant memory from last year.

“That little girl had never experienced the loss of anyone close to her until last year when she turned out to be the last person to see and talk with one of our residents, just minutes before the woman died. It was so special to her; an honor.”

Next month Greenwood hosts their Wesley pals for the school’s Winter Extravaganza.

That will be another in a series of what Mr. Rogers would consider beautiful days in the neighborhood. 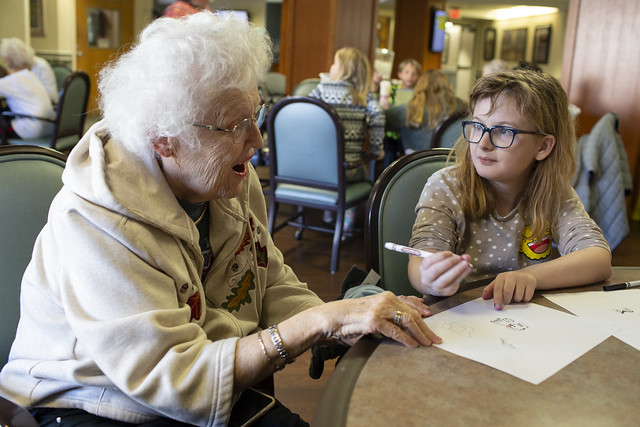