The show tells the tale of a poor young man who’s granted three wishes by a genie in a magic lamp, which he uses to woo a princess and thwart an evil sultan.

Thursday afternoon, 3rd-5th graders at Moulton Elementary School, the newest member of the district’s TA cohort, field-tripped to a special matinee performance of the show at the Des Moines Civic Center downtown, an opportunity similar to the one hundreds of DMPS students received when The Lion King toured through here in 2015.

On Friday morning, members of the cast paid a visit to Madison Elementary School for a Get Up & Go workshop.

Michael Everett, Celina Nightengale and Michelle West were waiting in Madison’s brand new gym like three granted wishes when students from the school’s drama club showed up. In short order they were learning lyrics, dance moves and lifestyle tips about exercise and nutrition, especially important for aspiring musical theater types, the all-around athletes of the performing arts.

The workshop lesson plan tied in perfectly with the Turnaround Arts model of arts integration across traditional curriculum boundaries. In one hour, the thoroughly engaged kids got big doses of PE, music and health science wrapped inside up-close exposure to professional thespians with bigtime showbiz resumes.

Speaking of whom, Everett, Nightengale and Morris made sure to save time to perform an excerpt from Aladdin, take a few questions from the “audience” and, the big surprise, introduce the real star of the show – the magic lamp!

No genie appeared, but Des Moines Performing Arts publicist Cathy Long did bring along the genuine article, carefully tucked inside its custom-made but unassuming carrying case for extreme safekeeping.

Always a special place, Madison had a touch of extra magic about it Friday morning. 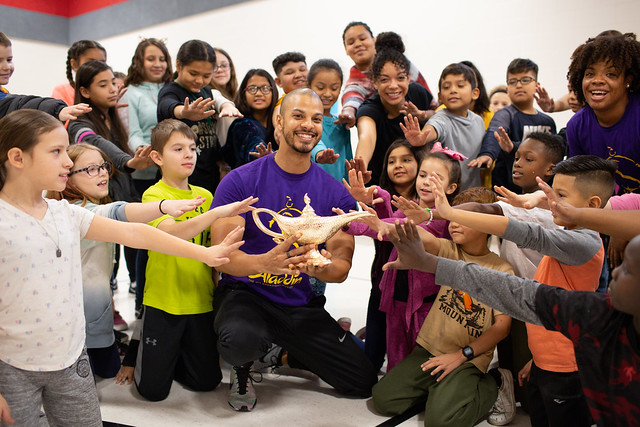