Callanan Middle School was the site for sore eyes Wednesday morning, thanks (again) to United Way of Central Iowa, Vision to Learn and Prevent Blindness Iowa.

More than 80 students reported to the library to take delivery of free eyeglasses after screenings and fittings at the school last month.

Since piloting at Lovejoy Elementary School in the spring of 2017, this absolutely visionary program has opened the eyes of hundreds of students at elementary schools throughout DMPS. But Callanan is the first middle school to benefit.

The library made sense as the distribution center at Callanan. There stands to be more traffic flowing through there the rest of the year, judging from the reactions of the first pair to pick up their pairs.

Eighth graders Aaliya Chiri and November Hicks were all smiles after donning their glasses.

“I’m happy that now I’ll be able to see what’s on the board in class,” said Aaliya. “Before, I had to get right up in front of it.”

November was pleased with the look of the red frames she’d selected. Vanity, let’s face it, could be an issue at the middle school level. But squinting’s not a good look.

“Now I won’t have to do that anymore when I’m reading,” she said. “I think these look good.”

The potential academic payoffs of improved eyesight are obvious. Eyeglasses do more for students than merely making them look more scholarly. But there are other dividends, according to Bennett.

“We hear so much anecdotal evidence about reduced behavior issues at the schools we’ve served,” she said. “One girl went from more than 30 office referrals before she got her glasses to zero.”

More kids in the library and fewer in the office. That IS a good look! 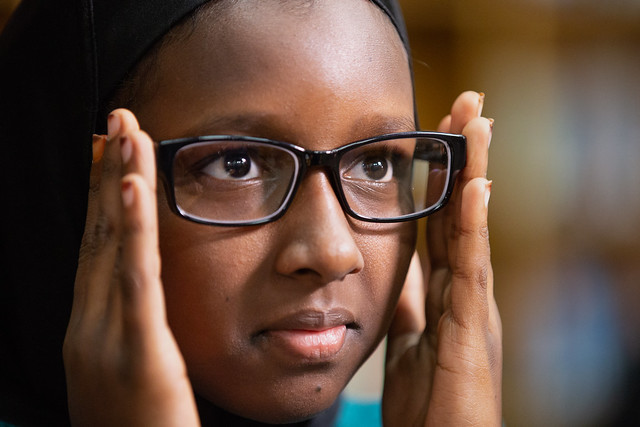