Endorsement deals between big-time sports and athletic gear manufacturers are commonplace. They’re high profile and high finance. Nike, Under Armour, Reebok and Adidas are brand names as familiar and popular as the elite athletes they outfit.

But here’s to Brooks, makers of what they describe as “the best running gear in the world – nothing more, nothing less,” and the company’s commitment to some of the most unsung, unheralded athletes of them all: high school cross country runners. Harriers, to those in the know.

When the Roosevelt High School girls’ team gathered after school Wednesday for a tune-up run on the eve of Thursday’s CIML conference meet at Ewing Park, there was a surprise in store. The girls already knew that Roosevelt is one of 25 beneficiaries of a grant program endowed by Brooks that provides gear and other resources for an overlooked and often underfunded sport. They’d received new shoes and warmups recently, but yesterday a special visitor was waiting with new uniforms that immediately shook them out of their shivers on a cold afternoon.

Coach David Roney has a friendship with Danna Herrick, an Iowa native and professional runner currently training in Michigan with the Hansons-Brooks Original Distance Project (sponsored by Brooks). All Brooks athletes were invited to nominate a high school team for the Brooks Booster Club grants and Danna nominated the Riders.

“Danna’s been a friend of mine since I started coaching at Roosevelt five years ago,” said Roney. “While she was working in Des Moines as a physical therapist, she came and worked with our team on some preventive exercises. We kept in touch after she moved to Michigan and our team took a retreat there in the summer of 2017. Danna came and stayed with the team to share her story and encourage the girls.”

When Brooks solicited its running team for grant nominees, it was no-brainer for Herrick.

“I hoped maybe I could inspire you, but it’s turned out that you inspire me,” Herrick told the team before the big uniform reveal. “You have a great team culture and tomorrow I want you to remember my favorite line from A League of Their Own: ‘The hard is what makes it great.’”

Yeah, it was cold under the shelter at the west end of the Waveland tennis courts where the team always begins its workouts. But that wasn’t the reason for all of the hugging going on. The genuine mutual appreciation on display was straight up heartwarming.

The team culture Herrick referenced is longstanding at Roosevelt where the girls have racked up nine finishes in the top 20 at the state meet since 2002, including two state champions. It’s hardly a needy program, but certainly a deserving one.

After slapping on their new togs, the team took off on a jog down Polk Boulevard. Thursday’s conference meet will lead to districts and then state. Harrick, meanwhile, is bound for the Frankfurt Marathon in Germany later this month. Amateur teens and a 31-year-old pro, thousands of miles apart, running side by side. 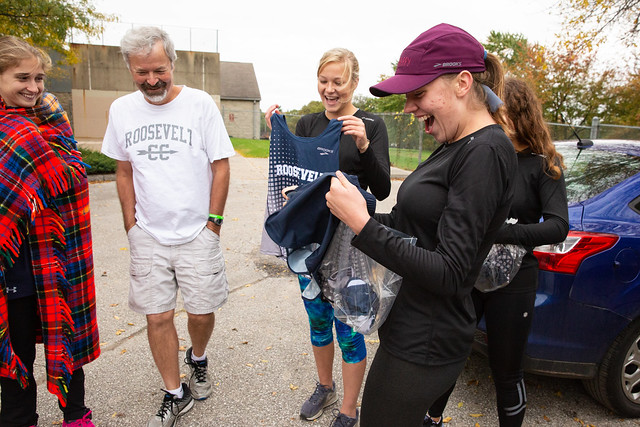