Sioux City East would have had to get up pretty early in the morning to beat the Lincoln Rails to the punch on Friday.

The two schools meet tonight on the gridiron at Hutchens Stadium. It’s Senior Night at Lincoln. And WOI-TV5 brought their roving weekly program Blitz Gameday to the Lincoln Roundhouse for a stage-setting, predawn live telecast that must’ve roused the whole Southside.

“We found out last week that they wanted to do the show from Lincoln,” said Activities Director Phil Chia. “We knew it would be a great chance to promote the school and Southside pride so we opened the doors at 5:30 AM, bought a lot of donuts and juice and invited the whole community.”

Besides the football team, the pep band was there. And the cheerleaders. And at least one student still clad in his bathrobe.

Teens aren’t used to doing their things first thing, whether it’s tooting a tuba or pumping pom-poms. That’s a primary reason why start times for secondary schools were moved back this year. But the Rails responded to Chia’s call to action in droves and were in full throat from the opening bell of the show.

Yesterday the breakfast menu at Lincoln featured a locally sourced breakfast pizza. On Friday, the early birds caught the donuts – and still had time to catch another 40 winks before class.

Watch segments of WOI-TV’s Blitz Gameday at the links below: 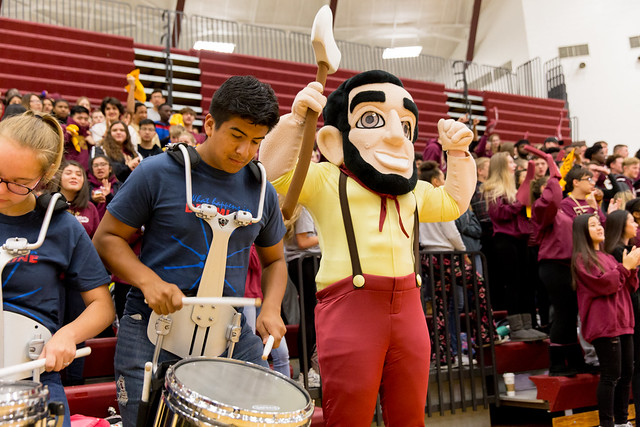