When the breakfast rush started at Lincoln High School on Thursday morning at 7:45, DMPS Executive Chef Chad Taylor was there with some menu suggestions for hungry students.

“Try the breakfast pizza,” he told them. “It’s made with all local ingredients. So are the corn muffins. Let me know what you think of them.”

I’m here to feed you and I’d like some feedback, in other words.

It was Iowa Local Food Day during National Farm to School Month, both efforts dear to Taylor’s heart that he plans in detail. This year they included a special dessert just for him, one he knew nothing about until it was served.

Also on hand at Lincoln was Iowa Secretary of Agriculture Mike Naig, who donned a hairnet and some latex gloves to stand a post on the chow-line. The pizza in particular was a hit. By the time the bell rang to signal students that it was time to head for class, it was sold out.

At that point, Naig slipped out of his apron and back into his role as a state official. He had a presentation to make. With the daily announcements garbling behind him over the school PA and Taylor, among others assembled for the occasion, videoing the ceremony on his smartphone, Naig proceeded to some important announcements of his own.

First, he pointed out the significance of Local Food Day and National Farm to School Month, a win-win for local agricultural economies and school districts and their students. In Iowa, he noted, 50 school districts are participants in the programs, including DMPS, the largest one in the state.

Right about then, DMPS Director of Food & Nutrition Amanda Miller slid over and relieved Chef Taylor of his phone because, unbeknownst to him, Naig’s main order of business was to present Taylor with an Agriculture Leader of the Year award, and Taylor’s hands had to be freed to accept it.

“These awards are an opportunity to highlight and recognize some of the leaders in our state that help make Iowa agriculture such a dynamic and vibrant industry,” said Naig.

They are not designated exclusively for school foodservice personnel, so Taylor’s selection marks him as a true standout among his counterparts around the state.

How sweet it was, the surprise, judging by the look on Taylor’s face. But there wasn’t much time to savor it.

For lunch, it was roasted chicken drumsticks with Chef Chad’s “Wowie” sauce, and a sweet potato roll – all locally sourced, like the main ingredient, a good cook. 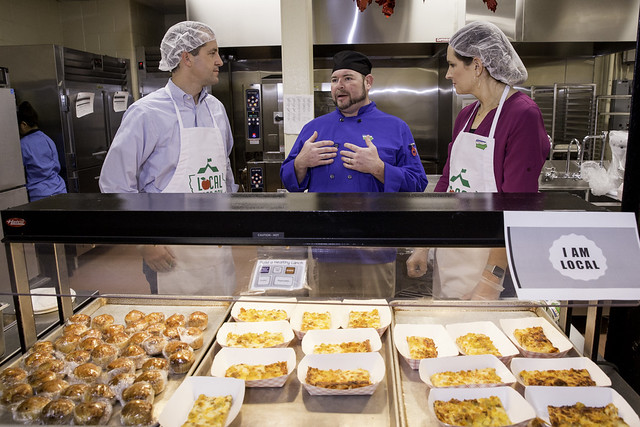