For Iowa farmers it’s almost harvest time, but a creative bunch of 2-5 graders at Carver Elementary School just got its colorful crop in the ground on Friday.

An expanse of greenspace just north of the Greater Des Moines Botanical Garden, and along the Neal Smith Trail, is now awash in a sweep of pinwheels designed, assembled and planted by the Carver kids and commissioned by Viva East Bank!, a public/private partnership that enhances the quality of life in the Capitol East, Capitol Park and MLK Jr. Park neighborhoods.

“Viva! received a Project Reinvest grant last year through NeighborWorks America to fund community improvements projects like Pinwheels on the Trail,” said Beth Hicks of the Viva! project management team. “Iowa Lutheran Hospital and the Botanical Garden got on board and we asked Carver if they’d get involved too.”

“This was inspired by a similar project in Brooklyn’s Prospect Park in New York,” according to Carver art teacher Jordan Josephsen. “The kids were fired up to do their part.”

They must have been at work on this public art commission since the school year began, right?

“No, actually it’s only taken them the last couple of weeks,” Josephsen said.

They made short work of the installation on Friday afternoon, too, after walking to the spot from school. Threatening skies dictated expedience, but it was also clearly fun to run around with bouquets of pinwheels and get them spinning.

Fifth grader Tae’Quan Gipson was distributing the artificial flowers by the fistful, and it was all an observer could do to get him to slow down long enough to say and spell his name.

Gulls gliding above the swollen Des Moines River veered over for a closer look at what was happening, hoping perhaps for something different to eat. If so, they were disappointed, but you won’t be if you walk, run or bike the trail north of the Botanical Center. Hurry, though. They’re beautiful, but not necessarily built to last. 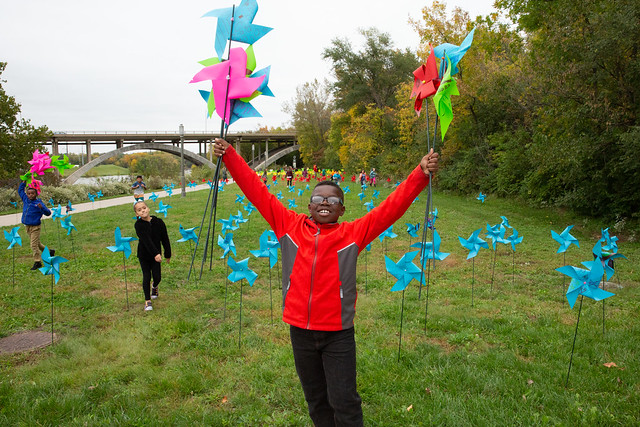