There was a whole lot of reading going on at Willard Elementary School on Tuesday morning, even more than usual as the school hosted an event that was equal parts please and thank you.

Read to Succeed is a United Way program that formally launched in the spring of 2016 during a ceremony on the front lawn of Greenwood Elementary School.

This was just as pretty a day, another one perfectly suited for an outdoor media event. Maybe even a prettier one since the occasion this time was to share lots of good news that’s happened thanks to RTS.

“Read to Succeed was United Way of Central Iowa’s first-ever community-wide call to action launched during our centennial celebration less than three years ago,” said UWCI President Elisabeth Buck, who delivered a promising report card for RTS. “In that short amount of time, we have deployed many strategies to support all students in learning how to read. One key goal was to engage 500 new volunteers by the year 2020 to read with elementary school students. I am thrilled to say that two years ahead of schedule, we have achieved that goal.”

To prove the point, plenty of volunteers were on hand to spend an hour inside reading with Willard 3rd graders prior to the ceremonies outside, employees from community partners Sammons Financial Group, Farm Bureau and KPMG.

Lesa, one of the Sammons volunteers, connected with a couple of live wires, Ayden and Bryan. Together they read, and enjoyed, When Walt Disney Rode a Pig.

With sunlight streaming in the window just above them, the boys took turns reading pages aloud. Ayden sprawled on the polished hallway floor and Bryan sat with his legs crossed. Lesa peppered them with questions. All three giggled and drew parallels between the lively account of Disney’s boyhood dreams and their own personal experiences.

This was the simple magic everyone would soon be talking about outside.

“As superintendent of Des Moines Public Schools, I am pleased to join United Way of Central Iowa and all of you in recognizing the achievements we’ve made since this effort was launched just three years ago,” said DMPS Supt. Dr. Tom Ahart, flanked by Lesa, Ayden, Bryan and the rest of the reading partners. “And it’s not just about celebrating our successes for these students, it’s about renewing our commitment to reaching our long-term goal that 90 percent of students will read proficiently by 2020.”

Since its launch a little more than two years ago, Read to Succeed has produced the following results in Des Moines and elsewhere in central Iowa:

There’s still a ways to go. Currently, one quarter of central Iowa 3rd graders are reading below grade level.

Want to help close the gap? Visit www.read2succeed.org to find out how. It’s easier than riding a pig – and maybe even more fun.

Photos of Read to Succeed Event at Willard Elementary School 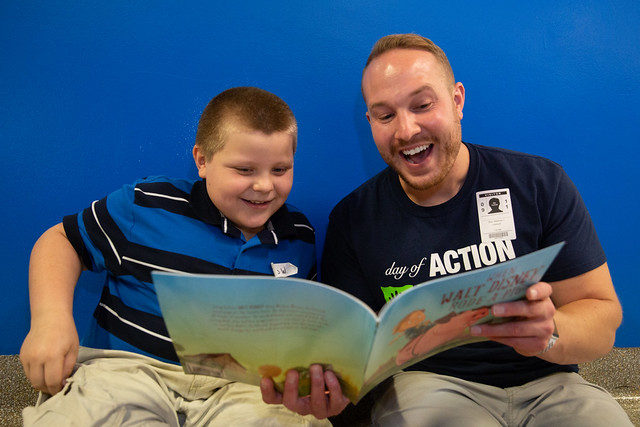 Video of Read to Succeed Event at Willard Elementary School