North High School principal Ben Graeber stuck out like a sore subject when he reported back to school from a holiday weekend on Tuesday morning.

Graeber was on the losing end of a wager that arose from some good-natured smack-talking on Twitter last week during the run-up to Friday night’s football clash between North and East. He and his counterpart at East, Leslie Morris, agreed that the losing principal would show up dressed in the garb of the rival school.

East won the game handily, 44-0, the latest renewal of the longest running high school football rivalry in the city, one that’s thought to be among the longest anywhere west of the Mississippi River. Friday marked the 116th football game between the Scarlets and the Polar Bears.

That result sent Graeber scrounging through his closet and dresser to make good on the bet.

“I taught at East for two years,” said Graeber as he stood at the crossroads of North’s main hallway and the student center Tuesday morning, greeting students arriving for classes, per usual. “So luckily, I still had this shirt and didn’t have to wear the one Leslie was going to provide.”

Graeber’s black polo was actually on the understated side, more in compliance with the letter of the bet than the spirit. All that marked it as East High gear were a small logo on the chest and EAST PRIDE embroidered tastefully on the back below the collar.

Most of the traffic whirring around him was oblivious to his turncoat outfit, but not everyone. A few students approached Graeber wanting to know what was up.

“I explained to them that I lost a bet on the football game. They told me I’m not their principal anymore,” Graeber said.

What can he do to save face and restore his image?

“I think maybe we need a rematch on the basketball court,” he said. 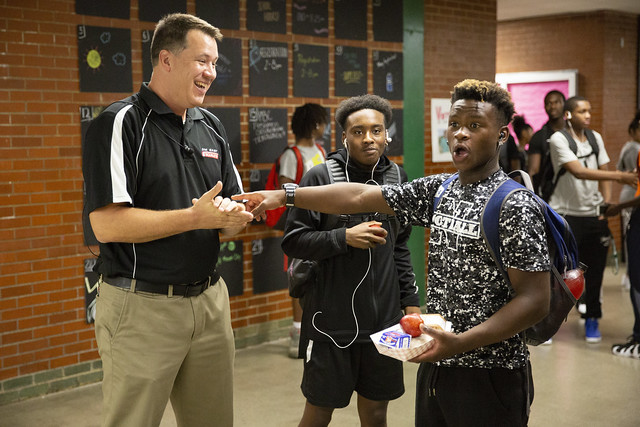