Barely a week into the new school year and already DMPS teachers have racked up their first formal accolade for 2018-19. It won’t be the last.

Now congratulate Tara Stemsrud, who fills that role at Meredith Middle School, where she’s in her 6th year – to overflowing!

That distinction automatically puts her in the running for the nine-state Central District regional award and ultimately the national honor.

“I found out in July that somebody nominated me,” Stemsrud said between classes Friday morning. “I don’t know who it was, but I guess it’s a good thing I happened to check my district e-mail account in the middle of the summer, or I wouldn’t even have known.”

Awareness of her nomination somewhat lessened the surprise when she found out she had won, but not all that much. Asked why she thinks she won, Stemsrud is at a loss to explain it, but if you watch her at work (if that’s the word; play fits just as well) it doesn’t take long before you can see that the enthusiasm she brings to her job is catching.

“I don’t care what subject you teach,” she said, “you better have some passion for it. You better walk the walk, too.”

Or run the run, in this case.

“I have been in Tara’s classroom a lot,” said Carlye Satterwhite, the DMPS Physical Education/Health Curriculum Coordinator. “She brings a great deal of passion and dedication to our profession and our students. I admire Tara’s vision. She captivates her students by activating their curiosity while educating them about lifelong healthy habits. Her ability to teach goes beyond the classroom. She’s a leader, a role model and a lifelong mentor.”

Friday morning Stemsrud had an 8th grade class stampeding from wall to wall in the Meredith gym during a game she simply calls “odd-even” involving a roll of her 12-sided nerf die. It was hard to know why, exactly, but the students were having a blast.

The old saying about herding cats? Try 8th graders. Stemsrud’s got it down pat.

“Don’t make the nurse mad at me!” she hollered into the headset mic that let her be heard above the din of pounding feet while she traffic-copped the game. In other words, no head-on collisions, please!

Following a brief break between classes, she was back at it with a class of 6th grade girls (6th grade PE classes are assigned by gender). Still tiptoeing into middle school, they timidly and quietly marched into the gym and sat on the floor in a circle around Stemsrud.

In no time, she had them on their feet and engaged in a series of “instant activities” designed to get their hearts racing while having fun, too.

Music blared from a loudspeaker while the games were played. Between Stemsrud’s upbeat instructions and the soundtracks, the vibe is more like a fast-paced health club aerobics studio than a school gym. The girls paired off for a medley of exercise including “not-it tag,” full-body rock-paper-scissors, and “partner push,” a palm-to-palm isometric duel to see who can make who shuffle their feet first. While that last one was played, so was the Beatles’ hit, I Wanna Hold Your Hand.

At the end of class Stemsrud regathered everyone for a quick cool-down to lower their body temperatures and heartrates while she reminded them about the importance of another exercise they need to do throughout their days: self-control.

Everyone’s beat slowed down – except hers. You wonder, does it ever? 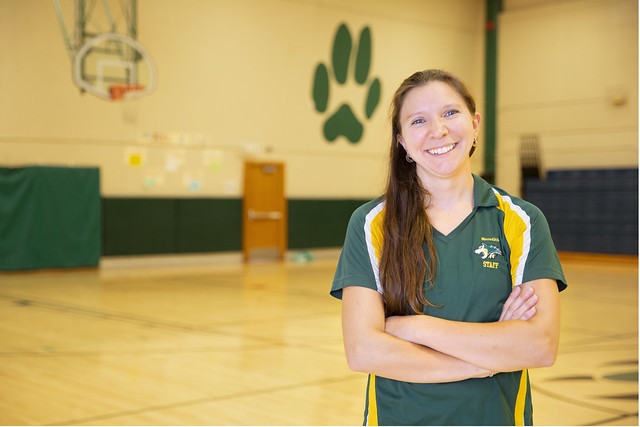