Kids & Cops: A Win-Win Program for DMPS and DMPD

They call it Kids vs. Cops, but it’s not really a versus type of a program. It’s more ampersand than adversaries; kids AND cops, getting together for some friendly competition that’s win-win for DMPS and the DMPD.

Wednesday afternoon was the first 2018-19 session for a program in its fourth year that’s held at the Robert L. Scott Fourmile Community Recreation Center on Easton Boulevard. The activities vary. Yesterday it was basketball. Fast-paced, full-court games to 12, counting by ones. The cops rallied to win the first one, 12-10, but the kids evened the score in the rematch. The lasting results, though, are the relationships that are forged.

“That’s what we’re here for,” said Officer Duoa Lor, a Laotian refugee who’s the first Southeast Asian sergeant on the DMPD. Think he can’t relate to kids whose families have found their ways to Des Moines from all over the world?

He has an office at the Fourmile as part of the Neighborhood Based Service Delivery unit he heads (NBSD).

“This is a way for us to reach out to kids and show them not to be afraid of us; that we can be friends. Last year 50-60 kids usually showed up. At the end of the year we threw a pizza party.”

While Lor and his fellow officers warmed up by shooting baskets, students began trickling in after their early dismissal from school. Kids vs. Cops is on a monthly schedule, always on Wednesdays. Lor brightened at the sight of kids he recognized as returnees from a year ago.

Angel Flores and Matthew Seley are 8th graders at Hoyt Middle School. They are regulars at Fourmile who say that Kids vs. Cops has opened their eyes and dispelled some false impressions they had about police officers.

“I thought they were racists,” said Flores. “It’s not true. This is fun, to come here and play with them.”

Warmups out of the way, it was game time, a back and forth blur of tall, short, teen, adult, male, female, black, white, brown and tats.

Led by Flores, the kids bolted to a 5-1 lead before the cops hit their stride. Flores, by the way, appears to be bound for the court at East High. He can shoot, pass and handle the ball.

Next month it’s dodgeball. That should be interesting. It’s one thing to break a cop’s ankles with a crossover dribble before draining a jump shot in their face, but throwing balls at them?

“We tell them, this is your chance,” said Sgt. Lor, grinning. “Come and let us have it.”

Like the alliances established between students and police officers via the presence of School Resource Officers in each of the district high schools, Kids vs. Cops is a preventive outreach that makes friends out of potential foes.

Better to meet on court than in court.

For more information about upcoming Kids vs. Cops programming, click here. And to learn more about the City of Des Moines Parks & Rec facilities at Fourmile, click here. 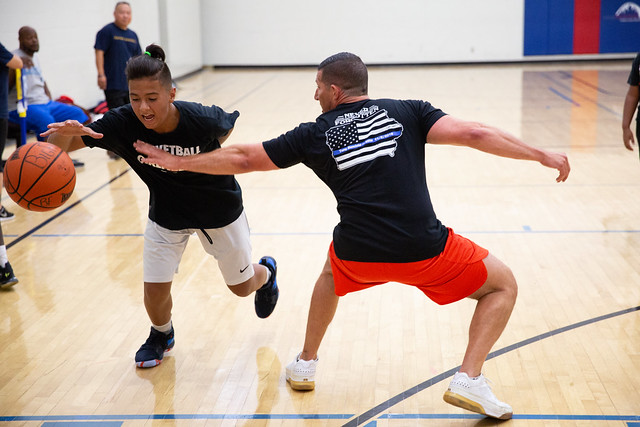