Principal Renee Gelfond and her staff sent them on a daylong leadership retreat.

“We want to foster more leadership behavior from our students so we thought we should start with the 5th graders,” Gelfond said. “It makes sense to describe to them what leadership is and how to recognize it in different forms. We are trying to explain why it’s important and give them some practice.”

DMPS Associate Superintendent Matt Smith addressed the students before they embarked upon an ambitious agenda of exercises and discussions that ranged from abstract to practical.

One outdoor activity designed to demonstrate the importance of trust between leaders and followers required one partner to be blindfolded while the other issued verbal directions for guidance through a circuit of pylons.

Later, students broke into their separate classrooms to make lists of Hillis’s strengths and weaknesses and generate suggestions about how they as 5th graders, the “seniors” of elementary school, could be of service.

Elijah Kwadiba’s hand shot up immediately and repeatedly as soon as his class formed a circle on the auditorium stage to brainstorm, almost in a spirit of “I-thought-you’d- never-ask.” His ideas included a buddy system that would assign 5th graders to tutor younger students and training sessions later in the year when the 5th graders could pass their wisdom on to the 4th graders and help prepare them for leadership roles next year.

His classmates came up with lots of others to be compiled and considered by the Hillis faculty planning committee. Cafeteria monitors, trash recycling and reading to kindergarteners were among the other constructive suggestions.

When it was time to walk back to their Hillis HQ, the day’s mission was accomplished. Leadership is soon to be trickling down through the ranks like good news.

As for the venue, Franklin Junior High served the school district well from 1951-1979, reaching a peak enrollment of more than 1,500 prior to the construction of Merrill Middle School on the Westside. Since its closure as a DMPS facility, it has been repurposed multiple times as a church, a parochial school and now, a hybrid multipurpose community center that may include everything from hotel and restaurant space to events of this sort.

There’s a temporary banner out front that renames the premises the same as they originally were: Franklin Junior High. And the name Benjamin Franklin is still engraved on the building’s façade. He’s the all-time All-American who said, “Tell me and I forget. Show me and I may remember. Involve me and I learn.” 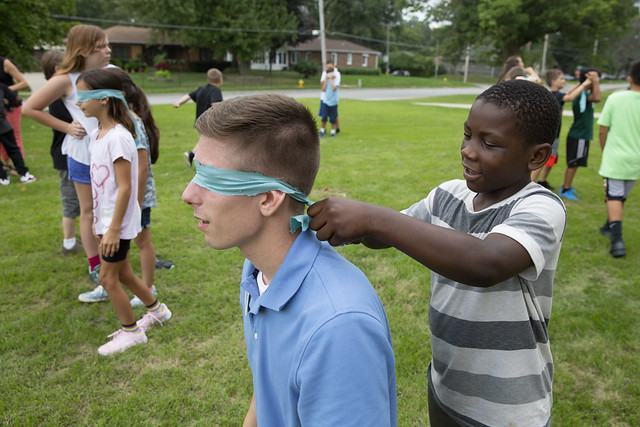