Public education is a vital but tough business. Operating capital is hard to come by. Statehouses around the country are under siege right now. So, sometimes, are local school boards as they grapple with fundamental changes like revamped school hours.

Progress has to happen on the fly. School districts can’t put up a sign that reads: Please excuse our mess while we retool to better serve you (despite decreased funding, increased student poverty, language barriers, etc.)

They need help, and DMPS got a big boost in 2014 when the district was one of a select few nationwide chosen by the Wallace Foundation to receive a substantial grant aimed at enhanced supervision of school principals. Research identifies building leadership as second only to classroom instruction among determinants of student outcomes.

Wallace is more than an underwriter of the district’s efforts. It’s a partner.

After Congress passed the Every Student Succeeds Act (ESSA) in 2015 to replace No Child Left Behind legislation, the Wallace Foundation created the ESSA Leadership Learning Community (ELLC), a public education consortium, in partnership with the Council of Chief State School Officers, the Council of the Great City Schools (DMPS is a member), and the National Urban League.

The ELLC facilitates networking and collaboration between educational leaders around the country by bringing them together in professional learning communities (PLCs) much like the ones DMPS has established within individual school buildings.

ELLC representatives from state governments and public school districts in Missouri, Nebraska, Oregon, Tennessee and Virginia are in Des Moines this week, at Wallace’s recommendation, to observe and review what it deems the exemplary work in progress at DMPS.

Andy Cole is a consultant with the Wallace Foundation who works on special projects with an emphasis on principal supervisors. He has also served as a lead reviewer for Wallace’s National Leadership Pipeline grant program.

“I led the site visit here prior to the grant award,” Cole said Wednesday morning before a presentation by DMPS administrators. “Wallace was impressed by the work and the vision in Des Moines.” And still is, apparently. “We wouldn’t be here this week otherwise,” Cole added. “There is a conscious confidence here and an attention to detail in everything they do. It’s difficult to find districts where others can learn about both policy and practice, but that’s what you have here.”

Tuesday illustrated what Cole was talking about.

In the morning, visitors attended presentations about community engagement (policy) before touring a “full service community school” at Scavo/Central Campus (practice). In the afternoon, they listened to a description of how DMPS parlayed its Wallace funding into an overhauled job description for the expanded number of principal supervisors, and the plans going forward.

“They (principal supervisors) used to spend 70% of their time in the office and 30% in their schools working directly with building leaders,” Tim Schott, the DMPS Executive Director of Secondary Schools, told the visitors. “Now it’s the other way around. Each supervisor is responsible for fewer schools and able to focus on coaching. So each principal gets more help they can share with their teachers that the teachers use to impact student achievement.”

It sounds like educational trickle down, but it’s not. They talk in terms of “cascades” of leadership, not trickles.

None of this is to paint a misleading picture of perfection. On the contrary, one element of the progress to date has been a more precise and honest assessment of the challenge that remains.

“We showed you some things this morning that are examples of excellence,” Schott said after the group returned from its tour of Central Campus. “But we also have dirty laundry to share.” For example: “Out of 400 students at Scavo, only 11 are enrolled in any of the career and tech programs that are available in the same building. That’s unconscionable.” Because the emphasis is on equity, of access and opportunity, as well as excellence.

Broward County Public Schools is another Wallace Foundation grantee. DMPS officials have visited there multiple times, as recently as last week, and vice versa. It’s the Florida district where Marjory Stoneman Douglas High School is located, where 17 people were shot to death in February.

Horrible as the shootings were, the aftermath has demonstrated how leadership can indeed cascade down from the top in a school district, even to the extent of catalyzing a national movement led by students whose training prepared them for a role they never sought or could have imagined.

“There is a signature to the work going on here,” said Cole, who considers himself more a facilitator than an evaluator of how DMPS goes about its innovative but difficult business. “I’m a critical friend of this district.”

A district that unabashedly declares its vision of becoming the model for urban education, daunting challenges notwithstanding. That might sound lofty, but did anyone ever reach the top of a mountain without aiming for it?

Photos of the ELLC Visit to DMPS 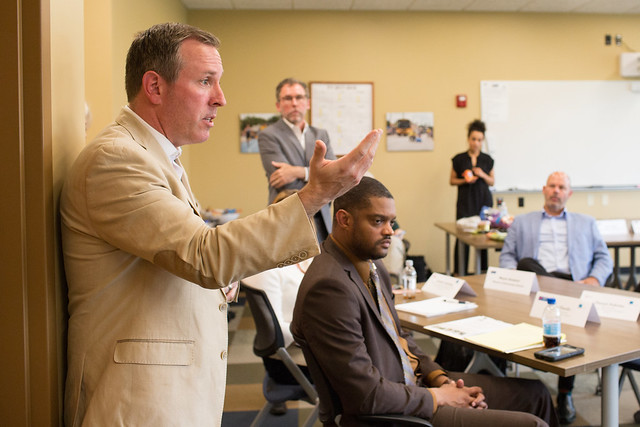