Thursday is the last day of school for elementary and middle schools while high schools end the year on Friday. But on Wednesday there was still an important bit of business to attend to.

Superintendent Dr. Tom Ahart and other district administrators met with high school students who responded to an open invitation to come and share ideas for an action plan aimed at maximizing student attendance. The open forum was held at DMPS offices at 2100 Fleur Drive and was pursuant to the Secondary Student Attendance Survey that was administered in March.

Over 7,000 students completed the survey. The overall response rate was 44% (63% for middle schools; 29% for high schools). One of the attendees at the forum suggested there would have been more participation if the district sent the survey to students’ personal email accounts instead of via Infinite Campus. That suggestion was duly noted for future reference.

Each of the five home high schools was represented at the event, and so was Scavo. Some valuable insights emerged from the frank discussion.

There was consensus that the current attendance policy lacks teeth. Students from multiple schools shared their sense that consequences are lacking for offenders. Currently, a sequence of parental notifications and school staff interventions as absences mount culminates with a student being dropped from a class when the count reaches 10.

Supt. Ahart shared some of the findings from the survey with the students and explained the district’s concern about what amounts to selective attendance.

“Our overall attendance rate is 95%,” he explained, “which is good. But we want to know what’s behind students coming to school for first block but leaving for second or third. If our schools aren’t places where students want to be, something’s wrong and we want to determine what that is and fix it.”

A student who misses 10% or more of scheduled class time is considered chronically absent. Skipping only one block out of a school day surpasses that threshold.

After some briefing on the aggregate results of the survey, students broke into small groups and developed recommendations for the district’s action plan centered on three primary elements:

The district has implemented Standards Referenced Grading in recent years to ensure greater academic uniformity from school to school. The students at yesterday’s forum called for something similar in terms of district policymaking – consistent communication and enforcement.

“How can we be held accountable for rules we aren’t even aware of?” was how one of the small groups framed it.

Director of High Schools Mike Vukovich said that student advocacy teams will be in place at each of the high schools to facilitate better communication between students and central administration.

“Some of the high schools already have them.” He said. “The ones that don’t yet are going to.”

Ahart thanked the students for their input and pledged more dialogue where this initial session came from.

“We will do this at least annually,” he said, “and take some of your suggestions today into account as we formulate this action plan.”

It was a promising way to end one school year and begin the next.

Photos from the Superintendent/Student Forum 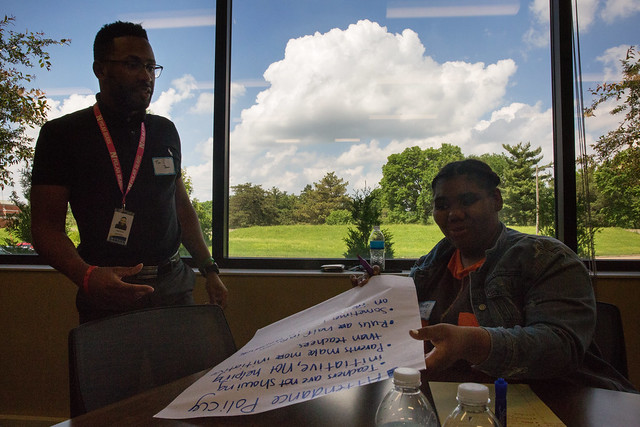