Shoes That Fit Visits Jackson Elementary on the Eve of Summer

Shoes That Fit was at it again Wednesday morning, this time at Jackson Elementary, and just in time to get kids’ summers off and running!

Bookending the event last fall when local program liaison Mediacom/OnMedia coordinated delivery of new shoes to the incoming freshman class at North, Shoes That Fit distributed 429 pairs of new shoes, one for every student, on the next to last day of the year.

In between, roughly 5,000 pairs of shoes, boots and new coats were provided to students at some 25 DMPS schools this year, according to Bob Montgomery who spearheads the partnership from the Mediacom/OnMedia side.

Everyone gathered in the school gym where the shoes were stacked by classroom against the wall. Jamie Dawson’s kindergarteners were the first to get their new shoes because, well, rank has its privileges, right?

Within minutes, it was off with the old and on with the new and Dawson’s troops were marching double-time back to class. Two frontrunners sporting the same style “kicks” and leading the procession were overheard making plans for later in the day.

“Yeah,” said the other, and the match was officially made with a high-five.

When they reached their room, the shoeboxes holding what was worn to school were stuffed into cubbies.

They always do because the students are pre-measured to ensure correct sizing. Montgomery and crew were at Jackson earlier in the month for the fittings which enable a distribution that’s as streamlined as could possibly be managed with 400+ grade-schoolers on the eve of summer break.

Like the kids hollered in unison right on cue in the gym before they laced up their new summer sneakers, “THANK YOU, SHOES THAT FIT!”

Photos from Shoes That Fit Event at Jackson Elementary 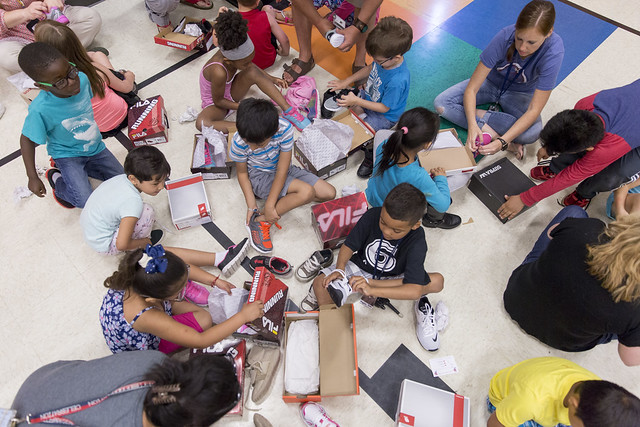