She got off the plane and made a beeline for the DMPS Center for New Americans downtown in the same building that houses Walnut Street School, where an audience comprised of clients from her constituency was waiting to meet her.

Since accepting a presidential appointment as the Executive Director of the White House Initiative on Asian Americans & Pacific Islanders (WHIAAPI) last fall, about the same time the Center was finding its footing, Ham has hopscotched the country on a “meet and greet tour” and scheduled a stop in Des Moines.

She first came to America in 1979 when she was six years old and describes herself now as a somewhat homesick Texan.

Superintendent Tom Ahart, who noted the district’s longstanding tradition of welcoming students from all over the world, officially greeted Ham and her small entourage.

“Our experience with southeast Asian refugees in particular goes back to the 1970s,” he said, alluding to the wave of immigrants that were invited here by then Governor Robert Ray in the wake of the Vietnam War.

Now the district numbers students from more than 100 countries among its student population of 33,000, almost 3,000 of whom are Asian American or Pacific Islanders. Nationally, they represent the fastest growing ethnic demographic. The AAPI population is expected to more than double by 2060.

“Besides educating our students, we are increasingly also trying to educate parents, too,” said Dr. Ahart, a nod to the important work going on at the Center, coordinated by Program Director Pablo Ortega and Outreach Program Supervisor Vinh Nguyen, himself one of the “boat people” who accepted Gov. Ray’s invitation after the fall of Saigon. They arranged Ham’s visit to Des Moines in collaboration with Sanjita Pradhan from the Greater DSM Partnership, a former WHIAAPI Commissioner.

Ham was working at the U.S. Department of Education when President Trump appointed her to the WHIAAPI post.

“I felt it was God’s calling to give back to this country that’s given so much to me and my family,” she said. “It’s not a job that can be done from behind a desk in Washington. Within three weeks of starting, we embarked on this tour. It’s important for me to meet people in pocket communities like the one here in Des Moines.”

And that’s what she did, meet people that come to the Center for help with everything from directions around town to English lessons. They had lunch together, and Ham hinted that some important announcements are forthcoming next month, officially proclaimed Asian American and Pacific Islander Heritage Month.

“They will have to do with the importance of education and career pathways,” she said. “I am going to take what I’ve learned on this tour and report it to the White House Domestic Policy Council.”

The stated mission of WHIAAPI is to improve the quality of life for Asian Americans and Pacific Islanders through increased access to federal programs, so maybe more help in the form of grants like the National Professional Development program is in the works. There are DMPS teachers currently taking advantage of an NPD grant received by Grand View University to learn how they can better support their ELL students. Could there be more where that came from?

One of the officials traveling with Ham is Dr. Nguyen-Lam, the WHIAAPI Program Director for the Office of English Language Acquisition (OELA).

They both got firsthand looks at the Center and some of the (brand) New Americans there, and know that additional resources will pay dividends. It will all be in their report.

Photos of WHIAAPI Visit to Center for New Americans 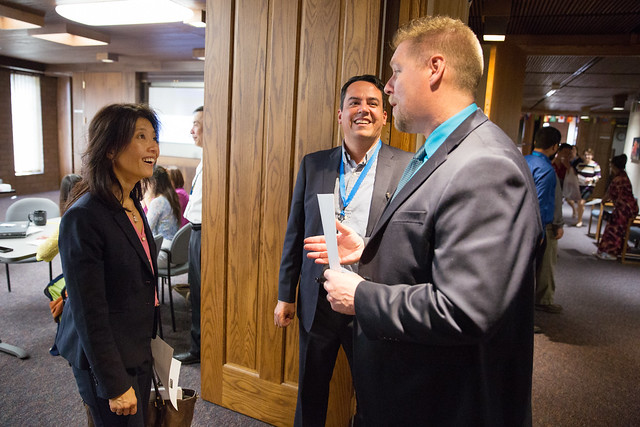