Nothing boosts beleaguered spirits like blue skies and a few extra degrees Fahrenheit/Celsius on the back end of a winter that’s overstayed its welcome. Except maybe…

Volunteers from community businesses were on hand to keep everything running smoothly.

Unified Sports Day is the first event through a new partnership between SOIA and DMPS. Last December, all of the district middle schools became active Unified Champion Schools, thanks in part to encouragement from Brody MS principal Tom Hoffman, and committed to raising awareness about intellectual disabilities and fostering collaboration and teamwork between students who might not otherwise engage with one another.

Dedicated to promoting social inclusion, Unified Sports joins people with and without intellectual disabilities on the same team.

Diversity is one of the hallmarks of DMPS, but diversity without inclusion means little.

A pair of Roosevelt 10th graders who are veteran Special Olympians delivered brief speeches during opening ceremonies to set the mood for the day.

Daniel Custis and Joy Rector have been friends since their days at Merrill Middle School, and they wished everyone good luck.

“Try your best. That’s what makes you a champion,” said Joy. Daniel fist-pumped in emphatic agreement.

Callanan 8th grader Kiana Collier belted a stirring National Anthem, followed by Hiatt’s Robert Thacker who recited the Special Olympics creed: “Let me win, but if I cannot win, let me be brave in the attempt.”

And away they went, each school whooping its presence when the roll was called by Joy and Daniel.

The game face for the day was an ear-to-ear grin. There really was no competition, just a lot of shared activity.

Next year, the district plans to register a number of elementary schools as Unified Champion Schools, too.

“The goal of this initiative is to promote the concept of inclusion and acceptance across the school district,” said SOIA Director of Unified Programs, Bryan Coffey. “We are excited to grow the program here in Des Moines with more events like the Unified Sports Day in the future.”

Did he say excited? There was a lot of that going around! 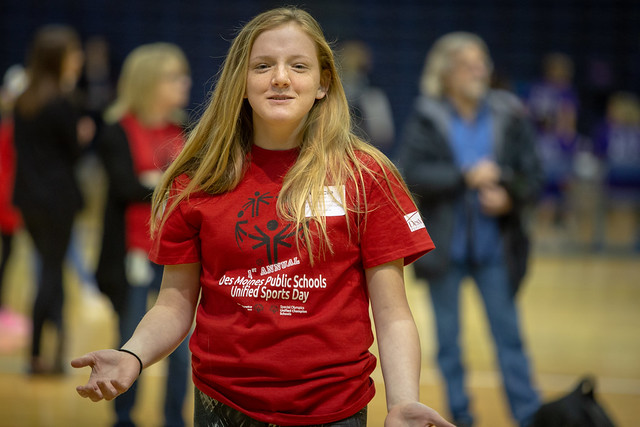